Animals aplenty, space at a premium in Africa’s oldest zoo 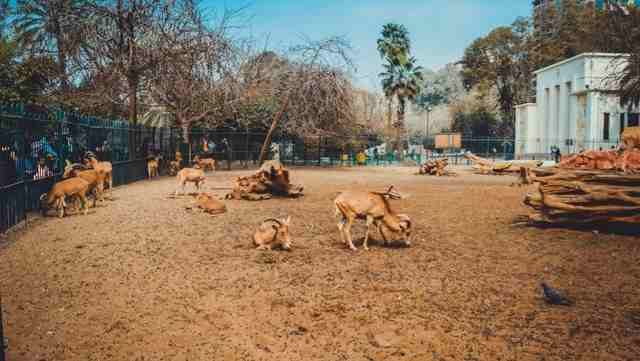 Facebook Twitter Copy URL
Copied
'We wish the natural environment could be recreated for the animals. It's not normal for an elephant to live in a tight space and on hard ground,' says Mona Khalil, head of the Egyptian Society for Mercy to Animals.

CAIRO, Egypt – Boba springs left and right for a Cairo zookeeper feeding him fruit, but the chimp’s exuberance contrasts with the pitiful lack of space and natural habitat in Africa’s oldest zoo.

Under the tall trees in the expansive Giza Zoo in the center of the Egyptian capital, children throw morsels to several monkeys, trying to elicit a funny reaction.

Other children crowd around the pen of Naima, an elephant who extends her trunk from behind the bars for treats.

“We wish the natural environment could be recreated for the animals. It’s not normal for an elephant to live in a tight space and on hard ground,” said Mona Khalil, who heads the Egyptian Society for Mercy to Animals.

The confined spaces for the animals was one of the reasons Giza Zoo lost its accreditation with the World Association of Zoos and Aquariums in 2004.

It was built in 1891, not long after the inauguration of the Suez Canal, and extends over about 344,000 square metres (410,000 sq yards) planted with exotic trees from abroad.

Amid the eucalyptus and palms, a metal suspension bridge designed by Gustave Eiffel harks back to an era when Egypt strove for modernity and scientific progress.

The zoo boasts 4,500 animals of 28 species, according to Mohammed Rajai, who heads the government’s central authority for zoos.

One practice that has been criticized is its “photography unit” which hires cameramen to take pictures of zoo-goers with the animals.

They can be photographed holding a vulture or a lion cub, among other animals.

“This violates standards for the care of animals,” according to Khalil.

Aside from posing a possible threat to zoo-goers, humans can pass on diseases to the animals.

“I’m searching for another job, I can’t even afford necessities with my salary,” said Khaled Oweis who has worked at Giza Zoo for 22 years.

Zookeepers earn tips for allowing visitors to interact with the animals, in violation of zoo regulations.

In a small building with caged hyenas, a keeper argued with a man who wanted to film him provoking a hyena with a stick to make the animal snarl.

“You’re trying to take a video and put it on the internet and say I torture animals. Just leave us be, to earn a living,” the keeper said.

About 150 people work in the zoo, and there are plans to increase their number.

“Most of the budget goes into feeding the animals,” he said, adding that the agriculture ministry to which his department is affiliated does not help with the zoo’s finances.

There have been some improvements, however: the zoo has employed a cleaning firm and Khalil said an open area planted with grass has been set aside for lions.

The zoo now plans to start a breeding program and to sell some of the animals to give the others more space, said Rajai.

Around 1.5 million Egyptians and 200,000 foreigners visit each year, with as many as 84,000 visitors a day during the spring holidays, he said.

For people with limited means, the entry ticket price of only five pounds makes Giza Zoo a favorite destination for a day out.

“It’s important that the ticket price remains affordable… especially when you consider the economic situation we’re living in,” said Mohamed Khalaf, a visitor in his 30s.

About 28 percent of Egypt’s 94 million people live under the poverty line, according to official statistics. – Rappler.com