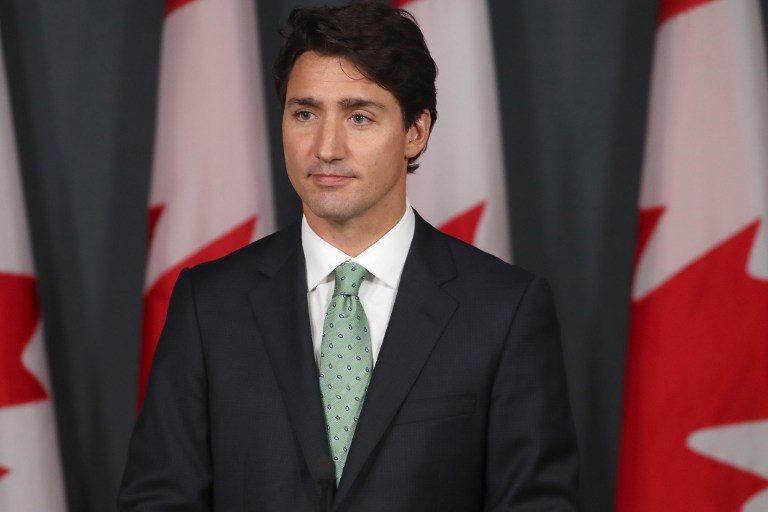 Facebook Twitter Copy URL
Copied
(2nd UPDATE) Ministers save the Trans-Pacific Partnership agreement after Canadian Prime Minister Justin Trudeau is accused of 'sabotaging' the trade deal that the US has already abandoned.

DANANG, Vietnam (2nd UPDATE) – Canadian Prime Minister Justin Trudeau was accused of “sabotaging” a trade deal after his no-show at a planned meeting on the sidelines of the Asia Pacific Economic Cooperation (APEC) Summit on Friday, November 10, to discuss the Trans-Pacific Partnership (TPP), a trade deal meant to counter China’s growing dominance in the region.

“We are not ready [to close the deal],” Canadian media quoted Trudeau as saying to defend his controversial stunt at the APEC Summit. He was concerned about the impact of the trade deal on the automotive sector, culture, and intellectual property.

Chile’s foreign minister Heraldo Munoz said negotiators almost had an agreement nailed down until a last-minute intervention by Trudeau.

“The Prime Minister of Canada has asked for more time,” he told reporters on Friday afternoon, adding that among the demands Ottawa was pushing for were stronger intellectual property protections.

Shinzo Abe, Japan’s Prime Minister, later confirmed to Japanese media that the TPP meeting had been postponed as Canada “was not at a stage where it could confirm the broad agreement among ministers”.

Japan, the world’s third largest economy, has been particularly active in pushing for a swift consensus on TPP, fearful that delays could lead to the collapse of the pact after years of negotiations and hand more regional influence to China.

To save the agreement that the US had already abandoned, ministers of the remaining countries supporting the deal agreed to change certain provisions to accommodate Trudeau’s protests.

On Saturday, November 11, they were able to issue a joint statement they were pressing ahead with the deal.

The remaining countries – dubbed the TPP-11 – said they had “agreed on the core elements” of a deal at the sidelines of the APEC summit in the Vietnamese city of Danang, after days of stalled talks raised fears it could collapse altogether.

The ministers said further talks would be needed to reach a full consensus before inking the deal, which now carries an even longer official name – the Comprehensive and Progressive Agreement for Trans-Pacific Partnership (CPTPP).

Analysts say the provisional deal reached in Danang will breathe new life into global free trade deals at a time when the United States is turning its back on them.

US may still join TPP The TPP that was previously led by the US is meant to counter China’s growing dominance in the region. Trump pulled his country from the deal at the start of the year, dismaying allies and casting doubt on an agreement heralded for tying lower tariffs to strong environmental and labor protections.

Trump has been something of a lone protectionist voice at the APEC summit in the Vietnamese city of Danang where world leaders, including China’s Xi Jinping, have been keen to promote the virtues of free trade and multilateral deals.

Japan’s lead negotiator Toshimitsu Motegi said the remaining members would still welcome the United States back into their pact.

“This time all the 11 countries are on board and this would send out a very strong positive message to the United States and other Asia Pacific countries in the region,” he said.

Canada had also held out to maintain environmental and labor protections linked to freer markets in the deal.

Those elements were thrown into jeopardy by America’s sudden withdrawal from the deal earlier this year.

Canada had dug in over those progressive clauses. But they are much less attractive to countries like Vietnam, Malaysia, Chile, and Peru now that the carrot of access to the huge US market has been pulled.

Trump’s election has upended years of American-led moves to open up global trade.

The US president is among leaders attending the APEC summit in Danang and on Friday he ladled out more of his trademark “America First” rhetoric.

In a strident address he said his country will “no longer tolerate” unfair trade, closed markets and intellectual property theft.

“We are not going to let the United States be taken advantage of any more,” he added, taking a swipe at multilateral trade deals.

Shortly after, China’s Xi offered a starkly different vision, casting his country as the new global leader for free trade.

Beijing is not included in the TPP, a deal initially driven through by the former US administration as a counterweight to surging Chinese power in Asia.

China has since sought to fill the free trade gap left by the United States, even if much of its own market remains protected.

Deborah Elms, executive director of the Asian Trade Centre, told Agence France-Presse that even without the US, TPP-11 is “the most important trade agreement signed in the last 20 years”.

“Companies had largely given up on the TPP after the withdrawal of the United States,” she said. “Now firms will need to scramble to figure out how the agreement matters to their business.”

At the APEC summit on Saturday Trump faces a long day of meetings with world leaders who are all pushing for more open trade.

Besides Xi, Russia’s Vladimir Putin, Japan’s Shinzo Abe, and Trudeau are among those attending.

The original TPP deal was once described by the US as a “gold standard” for all free trade agreements because it went far beyond just cutting tariffs.

It included removing a slew of non-tariff restrictions and required members to comply with a high level of regulatory standards in areas like labor law, environmental protection, intellectual property, and government procurement.

Without the US, TPP-11 represents only 13.5% of the global economy but the remaining countries are scrambling to avoid the deal’s collapse, especially given the increasingly protectionist winds sweeping through the US and Europe. – with reports from Agence France-Presse