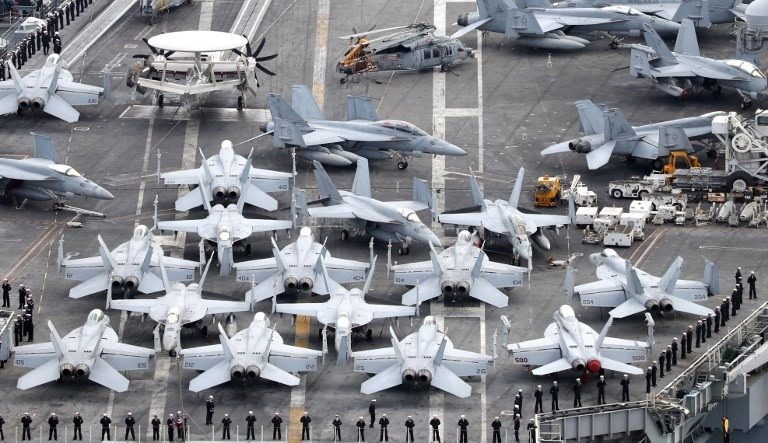 Facebook Twitter Copy URL
Copied
"The exercise is aimed at enhancing deterrence against North Korea's nuclear and missile threats and showing off preparedness to fend off any provocative acts by the North," a ministry spokesman said.

It is the first such triple-carrier drill in the region for a decade.

“The exercise is aimed at enhancing deterrence against North Korea’s nuclear and missile threats and showing off preparedness to fend off any provocative acts by the North,” a ministry spokesman said.

Nuclear-armed North Korea regularly denounces such military drills as rehearsals for invasion and sometimes conducts its own military manoeuvres or missile tests in response.

The US warships will carry out air defense drills, sea surveillance, defensive air combat training and other training operations, the US Navy said.

The exercises come on the heels of Trump’s visits to Seoul and Beijing this week, which were dominated by the question of how to counter Pyongyang’s nuclear weapons threat.

At a summit in Seoul Tuesday, Trump and South Korean President Moon Jae-In agreed to increase the deployment of US military assets around the Korean peninsula to step up pressure on the North.

Trump also warned North Korea not to underestimate the United States in a speech to the South Korean parliament on Wednesday, while offering leader Kim Jong-Un a better future if he gives up his nuclear ambitions.

He said Friday the Asia-Pacific region was being held hostage by the “twisted fantasies” of North Korean leader Kim Jong-Un, as he called on countries to stand united against Pyongyang.

Trump has embarked on a tour of Asia this week trying to rally regional support for curbing North Korea’s nuclear weapons programme, warning that time is running out over the crisis.

“The future of this region and its beautiful people must not be held hostage to a dictator’s twisted fantasies of violent conquest and nuclear blackmail,” he said during a speech in Vietnam at the annual Asia Pacific Economic Cooperation (APEC) forum.

The US administration thinks China’s economic leverage over North Korea is the key to strong-arming Pyongyang into halting its nuclear weapons and missile programmes.

Xi said the two countries reiterated their “firm commitment” to the denuclearisation of the Korean peninsula and the implementation of UN resolutions.

Xi repeated his plea for the issue to be resolved through negotiations, saying China was ready to discuss the “pathway leading to enduring peace and stability on the peninsula.”

Though China has backed UN sanctions, US officials want Chinese authorities to clamp down on unauthorised trade along the North Korean border.

But experts doubt China will take the kind of steps that Trump wants, such as halting crude oil exports to the North.

Beijing fears that squeezing Pyongyang too hard could cause the regime to collapse, sending an influx of refugees across its border and placing the US army at its doorstep. – Rappler.com