N. Korea brands Trump a ‘warmonger’ as his Asia tour moves to Hanoi 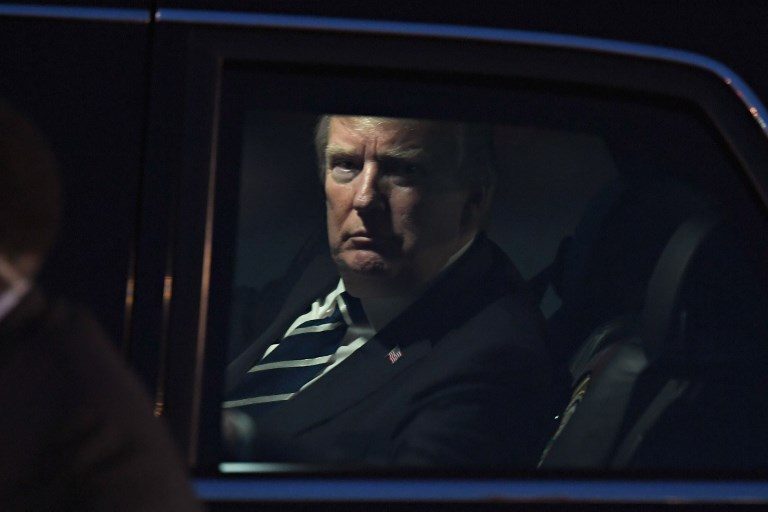 HANOI, Vietnam – US President Donald Trump was due to land in Hanoi on Saturday, November 11, as North Korea slammed his “warmonger” Asia tour, saying it will only accelerate Pyongyang’s push for a full-fledged nuclear deterrent.

Trump has repeatedly railed against the North as he urges the region to take a united front against the threat posed by the isolated nation, which has sparked global alarm with nuclear and missile tests in recent months.

On Friday, he warned world leaders gathered in the Vietnamese resort city of Danang that the Asia-Pacific region “must not be held hostage to a dictator’s twisted fantasies”.

Pyongyang issued its retort Saturday branding Trump’s Asia tour a “warmonger’s visit for confrontation to rid the DPRK of its self-defensive nuclear deterrence”, in the first comments on the visit by a North Korean official.

Tensions over the North’s weapons program have surged in recent months, as Pyongyang carried out a sixth nuclear test – by far its largest to date – and test fired dozens of missiles, some capable of reaching the US mainland. (RELATED: 3 US carriers lead naval drill aimed at N. Korea)

In a speech to the South Korean parliament on Wednesday, Trump warned Pyongyang not to underestimate the United States, while offering leader Kim Jong-Un a better future if he gives up his nuclear ambitions. (READ:

The North on Saturday said Trump’s warnings “can never frighten us or put a stop to our advance”, according to the state-run KCNA news agency, quoting a Pyongyang foreign ministry spokesman.

Instead the threat “pushes us to speed up the efforts to accomplish the great cause of completing the state nuclear force”, the statement said, dismissing Trump’s tour of the region as a “business trip”.

Rewriting America’s trade relations with the Asia-Pacific region has been Trump’s other core message, giving ample airing to his “America First” mantra.

The combative billionaire turned president accused the region of taking advantage of US largesse in rules-based trade deals while retooling their own economies with “unfair” subsidies and protected markets.

He is set to land in Vietnam’s capital Hanoi on Saturday where he will meet its Communist leadership, following his meetings with global leaders at the APEC summit in Danang.

Vietnam has eagerly courted trade and investment with the US since Trump’s election, moreso after he yanked the US from a key Pacific Rim trade pact, taking with him low tariff access to the world’s largest market.

The former wartime foes became friends under Trump’s predecessor Barack Obama, who embraced Vietnam as part of his strategic pivot to Asia, which sought to counterbalance China’s rise.

Those are likely to be muted as Trump seeks to use the US’ enormous economic heft to build bilateral trade deals.

He has already binned US participation the Trans-Pacific Partnership, the cornerstone of Obama’s Asia embrace which Trump pulled out of in January. (READ: ‘Framework’ agreed on Asia-Pacific trade deal without US)

Vietnam stood to gain enormously from the deal before the US pullout, opening the door to America’s huge market for its cheaply manufactured goods.

Though Trump is not as revered in Vietnam as his predecessor, a Pew survey last week found 58 percent of Vietnamese respondents have confidence in him.

Trump will attend a state banquet on Saturday before a welcoming and deal-signing ceremony on Sunday morning.

He leaves for the Philippines on Sunday afternoon where he will attend the ASEAN summit of Southeast Asian leaders. – Rappler.com