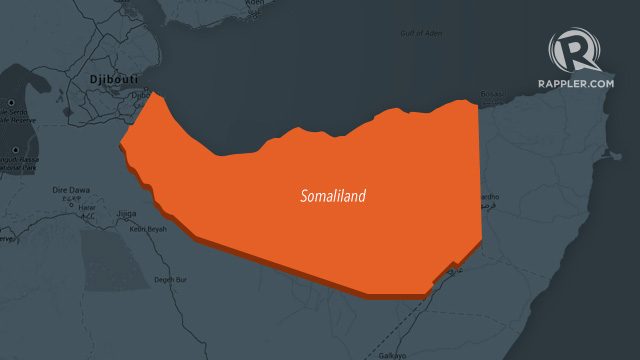 Facebook Twitter Copy URL
Copied
Incumbent Ahmed Mohamud Silaanyo is not seeking reelection in Somaliland, which has been striving to attain international recognition ever since it broke away from Somalia

MOGADISHU, Somalia – The self-proclaimed state of Somaliland will vote for a new president on Monday, November 13, hoping to continue a series of democratic transitions of power that sets it apart from its troubled neighbor Somalia.

The northern territory, which is more tribally homogenous and stable than the rest of Somalia, broke away in 1991 and has been striving to attain international recognition ever since.

Three candidates are running for the state’s top office, seasoned politicians Muse Bihi of the ruling Kulmiye party and opposition candidates Abdirahman Iro and Faysal Ali Warabe, who was defeated in previous elections in 2010.

Elections are meant to be held every 5 years, however the poll was delayed for two years due to drought and other technical issues.

Campaigning wrapped up on Friday after weeks of rallies around the region for Somaliland’s third democratic election.

The vote is set to be the most sophisticated yet with some 700,000 voters registered using biometric eye scanners which will identify them before they cast their ballots.

“The sophisticated equipment which was used to register voters reads the eye of the individual and it’s the first time such equipment is used in elections,” said Said Ali Muse, spokesman for the national electoral commission. (AFP earlier reported his name as Yonis Ali Nur.)

He said social media will be suspended during the counting of votes amid concerns of interference from outside the borders of the semi-autonomous state and speculation over results.

“It is very difficult to control social media and the overall media but we have requested the communication companies to temporarily suspend the social media platforms,” said Nur.

Human Rights Watch bemoaned the move to curb social media in a statement Friday, saying that if Somaliland authorities were concerned about fake news and social unrest they should “disseminate accurate information and discourage violence”.

“It is not only the election itself and the leader but the process and the fairness, the international community is looking at us and if we are smart enough, we will vote smoothly to show we are a democracy,” he told Agence France-Presse (AFP).

Somaliland, a former British protectorate, won independence in 1960 but days later joined with Somalia. In 1991, after years of bitter war with the government in Mogadishu, it declared independence from the rest of the country.

While anarchic southern Somalia has been riven by years of fighting between multiple militia forces and Islamist violence, Somaliland has enjoyed relative peace.

The one-person-one-vote democratic election process in Somaliland stands in stark contrast to that in Somalia, which elected a president earlier this year in a limited electoral process that saw handpicked clan elders choosing delegates who were allowed to vote. – Rappler.com