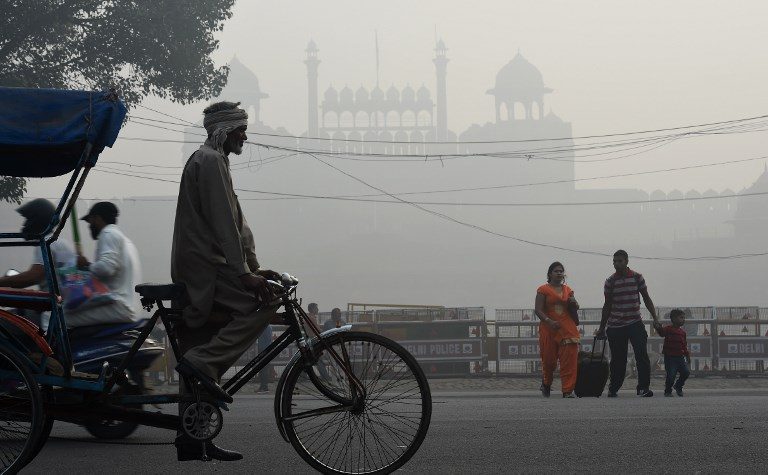 NEW DELHI, India – India’s smog-choked capital has called off a plan to restrict private vehicle use after the country’s top environmental court ruled women, VIPs, and two-wheelers could not be exempt.

Delhi and its surrounding states have been shrouded in a hazardous fog of toxic pollutants for nearly a week, prompting authorities to roll out a slew of measures to combat the crisis.

The state government said on Thursday, November 9, it would impose vehicle rationing for the world’s most polluted capital over 5 days starting Monday in the hopes of improving air quality, as doctors declared a public health emergency.

But as India’s federal environmental court ruled against any exemptions – not including emergency vehicles and those running on greener compressed natural gas (CNG), or most of Delhi’s public transport – local authorities said the scheme would be halted.

“At the moment we are calling it off,” Delhi’s transport minister Kailash Gehlot told reporters on Saturday, November 11.

“We are requesting the court to reconsider two conditions – one on two-wheelers and the other on ladies – because with both these in place, it will be very difficult for us to implement.”

He said the government would struggle to cope with the extra pressure on public transport while the biggest issue was “the safety and security of women”.

The “odd-even” scheme, introduced temporarily last year, says vehicles with license plates ending in odd numbers can only be driven on odd-numbered dates, and those with even-numbers on others.

The original scheme exempted VIPs – such as judges, politicians and police – as well as female drivers, two-wheelers and emergency vehicles.

The crisis comes amid the annual post-harvest burning of crop stubble and the onset of winter, which together have caused levels of dangerous pollutants to skyrocket.

Delhi has also banned all construction, barred lorries from entering the city and shut down all schools until Sunday. – Rappler.com