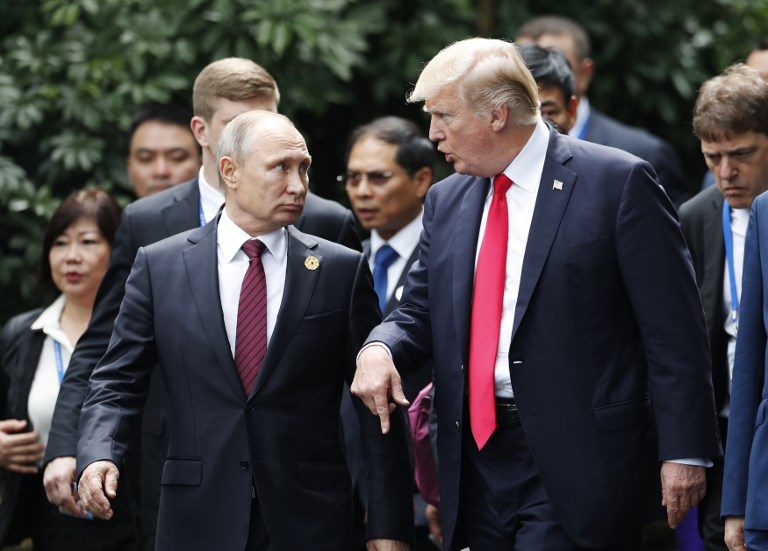 DANANG, Vietnam – Donald Trump and Vladimir Putin both sought to dampen claims of Moscow’s meddling in US elections, with the Russian leader branding the accusations as “fantasies”, after meeting in Vietnam on Saturday, November 11.

The two leaders snatched brief but chummy discussions on the margins of an Asia-Pacific summit, in an encounter overshadowed by claims over Russian influence in the vote that propelled Trump to the White House.

Trump, whose key former aides are under a US investigation for alleged collaboration with the Kremlin, said he repeatedly asked Putin about the claims during their chats at the APEC summit in the Vietnamese resort of Danang.

“He (Putin) said he didn’t meddle. I asked him again,” Trump told reporters on Air Force One as he flew to Hanoi for a state visit.

“You can only ask so many times… He said he absolutely did not meddle in our election,” he said, adding he felt Putin seemed “very insulted” by the persistent accusations, which have dogged Trump throughout the year since his shock poll win.

Trump’s former campaign chairman Paul Manafort and an associate are under house arrest on charges linked to an investigation by special counsel Robert Mueller into allegations that the campaign colluded with Russia.

Revelations by Facebook and Twitter that Russian-sponsored fake news flooded US social media in the election run-up have further deepened scrutiny on ties between the nations.

But Putin swatted away accusations of mischief-making by Moscow as a US “domestic political struggle”, in comments to reporters in Danang.

“I think these are some sort of fantasies,” he said of claims of collusion between the Kremlin and the Trump campaign.

Trump and Putin met 3 times on the margins of the APEC summit, sharing warm handshakes and brief words.

The pair appeared to have struck a chummy tone, with Trump describing a “very good feeling” after the talks, and Putin remarking on the “well-mannered” former reality star.

The exchanges produced a rare common ground on the war in Syria, a bloody 6-year conflict which has seen the US and Russia back competing factions.

In a joint-statement the leaders said there was “no military solution” to the war, an agreement that marks a small but incremental step towards peace.

Trump also gave a loud airing to his “America First” rhetoric at the APEC summit.

In a speech on Friday Trump said American jobs had been siphoned off overseas by countries with cheap labour but little compunction to play by trade rules.

“We are not going to let the United States be taken advantage of any more,” he said, adding his country would now use its economic might to cut favourable bilateral deals.

China’s Xi Jinping laid out a different narrative to the same hall, positioning the world’s second largest economy at the heart of the future of global free trade as the US retreats.

As a first mark of an new trade era without the US as its pivot point, 11 Asia-Pacific countries on Saturday agreed to press ahead with the Trans Pacific Partnership (TPP) – a major agreement abruptly abandoned by Trump at the start of the year.

That dismayed allies and cast into doubt an agreement heralded for tying lower tariffs to strong environmental and labor protections.

After a 3-day wrangle that at points threatened to see the massive pact unravel, delegates from economies including Japan, Australia, Canada and Malaysia, agreed to rescue “core elements” of the deal.

It emerged in 1989, casting itself as a beacon for free, open trade and globalization – an idea that has been on the rack since Trump’s ascent to power and the UK’s Brexit vote. – Rappler.com