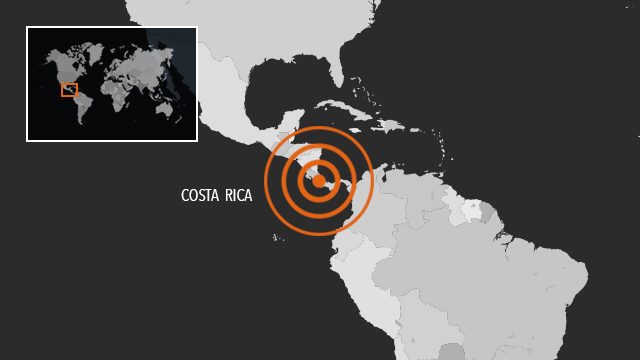 SAN JOSE, Costa Rica (UPDATED) – A strong earthquake, measuring 6.5 according to a US seismological agency, rocked Costa Rica late Sunday, November 12 (November 13, Manila time) but there were no immediate reports of damage or casualties.

The Pacific Tsunami Warning Center did not issue a tsunami alert. Several aftershocks were felt.

“We don’t have report of any tragic situations from the recent earthquake,” the public security ministry said on Twitter.

In the inland capital San Jose, buildings swayed for a couple of minutes. Local media reported that the quake was strongly felt across much of the country.

One network, Channel 6, showed the studio of a sports program that was live at the time, with the camera and the table shaking. It also showed images of alarmed people running in a supermarket as products fell to the ground.

While power was largely unaffected, there were reports of some areas losing electricity and cellphone transmission.

Media in neighboring Panama and Nicaragua said the earthquake was felt on their territories too, but no damage was detected.

Costa Rican officials urged citizens to avoid clogging the emergency lines by not calling 911 unless it was to give information about an urgent situation.

“We remind you to remain calm,” the presidency said on its official Twitter feed. – Rappler.com