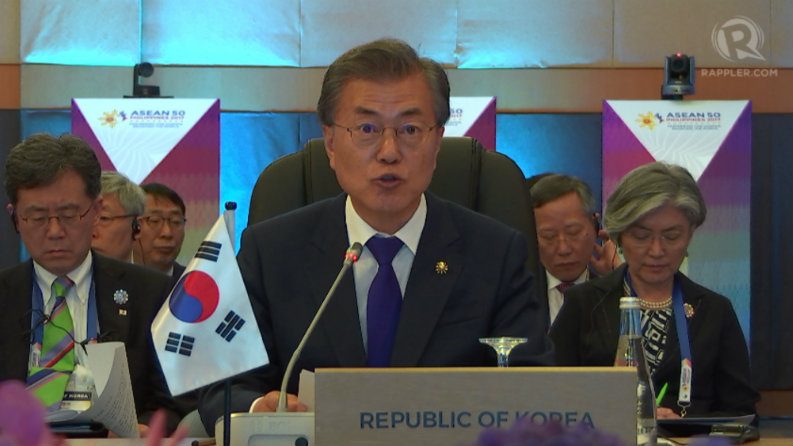 MANILA, Philippines – South Korea on Monday, November 13, said it is “determined” to bring its ties with the Association of Southeast Asian Nations (ASEAN) to “new heights” amid growing concerns over persistent threats from its neighbor North Korea.

South Korean President Moon Jae-in made the statement during the ASEAN-South Korea summit in Manila, one in a long series of meetings between the regional bloc and its dialogue partners.

Summit chairman Philippine President Rodrigo Duterte, speaking ahead of Moon, also highlighted the “growing ties” of the regional bloc and South Korea in the past 28 years, calling the two parties “partners for peace and prosperity.”

At the end of their statements, Duterte playfully asked reporters covering the summit to leave by “most respectfully [asking them] to disappear.”

And while many found Duterte’s quip hilarious, the topics that will likely be tackled during the Summit are anything but.

While neither president made mention of North Korea, it was, without a doubt, among the critical issues that will be taken up in Manila. The regional bloc is expected to hit North Korea for its missile tests, in a draft Chairman’s statement.

A final statement will be released on November 13.

Moon, a human rights lawyer who won the presidency in May 2017, is the first South Korean president to appoint a special envoy to ASEAN. Cheong Wa Dae currently serves that function.

The South Korean president said an “enhanced cooperation in breadth and depth” between ASEAN and South Korea would “bring out new benefits and prosperity on both sides.”

North Korea and its missile tests have been a central issue during the ASEAN meet, as well as during the recently-concluded Asia-Pacific Economic Cooperation in Vietnam.

An armstice signed in the ’50s technically put an end to hostilities between the two countries, but no peace treaty was signed. North Korea has repeatedly earned the ire of the international communty, including China, for refusing to put an end to its missile tests. – Rappler.com