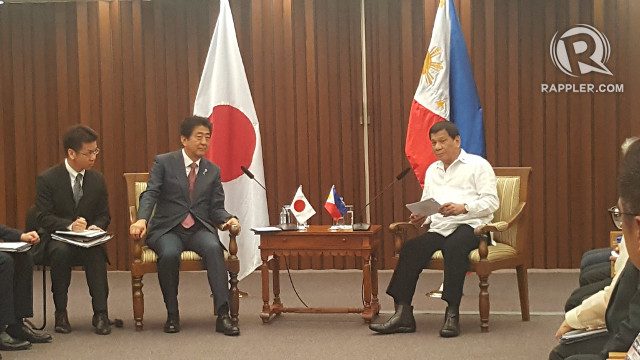 Facebook Twitter Copy URL
Copied
During his bilateral meeting with Japanese Prime Minister Abe, the Philippine President cautions North Korean leader Kim Jong-un that it's not in his country's interest for him to 'swagger around and threaten the world'

“It is not to the interest of North Korea to swagger around and threaten the world, keeping us hostage with the atomic weapons,” said Duterte on Monday, November 13, during the meeting held on the sidelines of the 31st Association of Southeast Asian Nations (ASEAN) Summit and Related Summits.

“We condemn his several launching of missiles. It is bad, it puts a strain on everybody, not only in Japan but all over the world,” said Duterte.

Right before the media were asked to leave the room, the Philippine President said there are efforts to persuade or “plead” with Kim to prevent him from “ending life on this planet.”

“He should realize that he’d be responsible for ending life on this planet if his mind goes out of control. That’s why we are persuading him, maybe pleading with him to stop the –,” Duterte was heard saying, before media were led out of the room.

As he declared full support for Japan amid tensions in the Korean Peninsula, Duterte emphasized the special friendship between Manila and Tokyo.

“I am reaffirming, in the strongest possible language, that we have a very strong bond. It’s almost a sentimental attachment for many years,” Duterte told Abe.

He also thanked the Prime Minister for arranging his courtesy call with Emperor Akihito and Empress Michiko of Japan, a memory he said he’ll cherish forever.

“I would like to thank you and the Japanese government for making it possible for me to have an audience with the Emperor, one of the things I will maybe remember for all time,” said Duterte.

He expressed gratitude for Japan’s assistance for Marawi rehabilitation and planes they gave to the Philippine military.

Abe and Duterte then witnessed an exchange of notes on 4 projects, including the Metro Manila subway. – Rappler.com