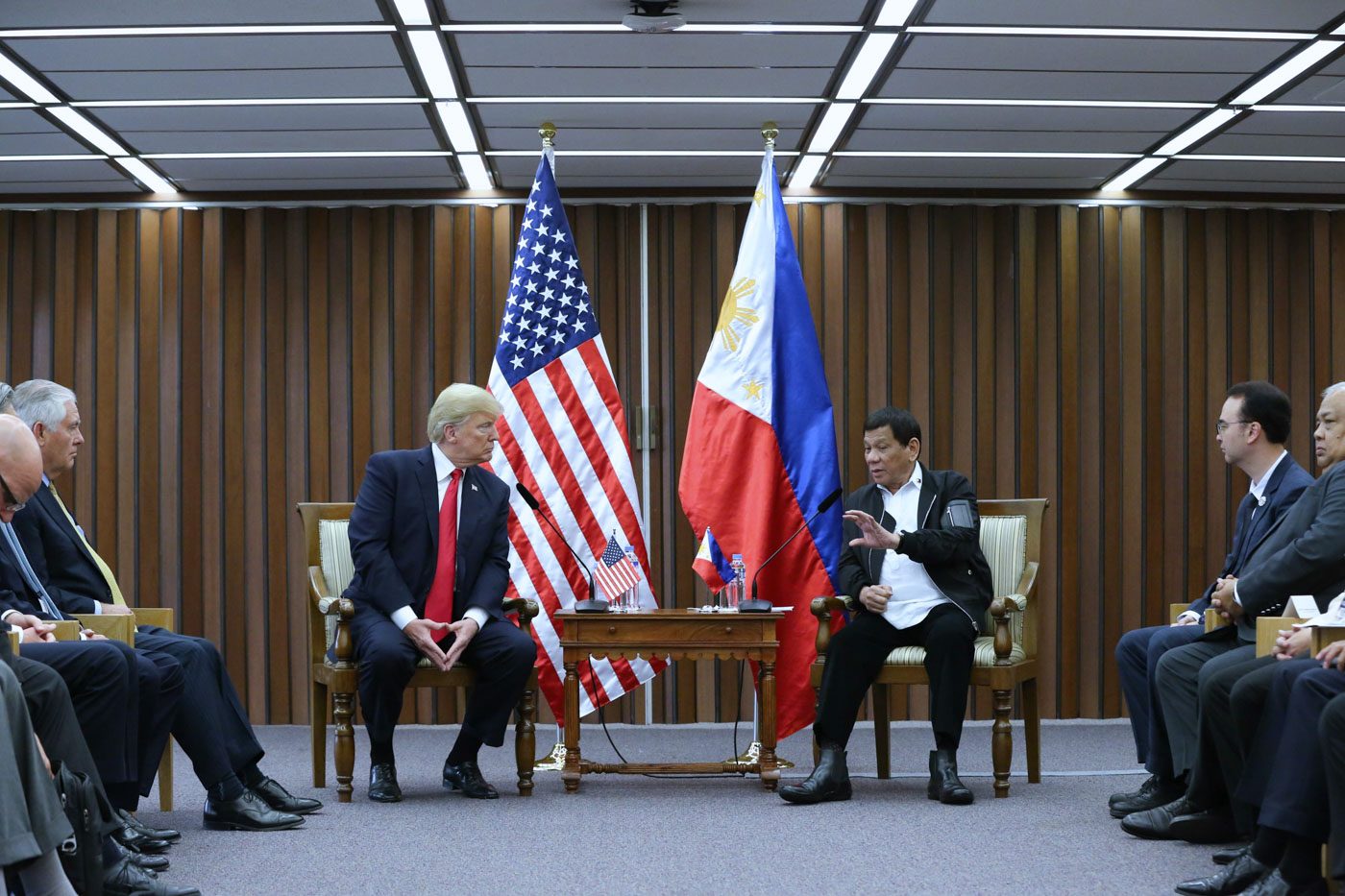 Facebook Twitter Copy URL
Copied
The calls for resolution of the conflict from the United States and the Philippines, comes after the Un Secretary-General also met with Aung San Suu Kyi and after the Rohingya issue was raised at the ASEAN Summit plenary

MANILA, Philippines – US President Donald Trump and Philippine President Rodrigo Duterte made sure to include the violence against Rohingya in their joint statement, and reiterated the need for humanitarian assistance for those affected.

“Both leaders called for the expeditious delivery of humanitarian assistance to affected communities, and welcomed the Myanmar government’s commitment to end the violence, restore media access, ensure the safe return of displaced persons, and implement all of the recommendations of the Advisory Commission on Rakhine State, and urged all parties to support these government commitments.”

The two countries also “expressed their support for ASEAN’s role in working with the government of Myanmar to provide humanitarian assistance.”

Aung San Suu Kyi, State Counsellor of the Republic of the Union of Myanmar, faced rising pressure to resolve the Rohingya crisis during the Association of Southeast Asian Nations (ASEAN) Summit here.

“The Secretary-General highlighted that strengthened efforts to ensure humanitarian access, safe, dignified, voluntary and sustained returns, as well as true reconciliation between communities, would be essential,” the statement said.

It came after the Rohinya issue was also raised at the ASEAN Plenary, according to Philippine Presidential Spokesperson Harry Roque.

“Myanmar specifically addressed Rohingya issues. Myanmar specifically said one, they are in process of attending to Kofi Annan report. Two, they welcome humanitarian assistance. And that the process of repatriation of [Rohingya] would conclude after signing of a Memorandum of Understanding with Bangladesh. There were no further details mentioned by Myanmar,” Roque said at a press briefing on Monday.

Roque was referring to the report by the Kofi Annan Foundation from the Advisory Commission on the Rakhine State, a product of one year of consultations held across the state and in other parts of the country and the region.

The final report, chaired by Kofi Annan, includes recommendations specifically on citizenship verification, rights and equality before the law, documentation, the situation of the internally displaced, and freedom of movement, which affect the Muslim population disproportionately.

But human rights advocates agreed the discussions so far are not enough, as they fall short on holding anyone accountable.

“What ASEAN and Myanmar had done today is that they’ve checked the Rohingya box and said we’re looking at the humanitarian aspects without a whisper of the fact that this human rights catastrophe has been inflicted by the Myanmar security forces and continues even while we speak,” Philem Kine, Deputy Director for Asia of Human Rights Watch told Rappler.

“There’s no mention of accountability for those crimes.”

Jera Lego, research associate at an international research institute in Tokyo, also questioned whether words would translate into concrete actions.

“Generally speaking, saying that the Kofi Annan report will be addressed does not necessarily mean any progress can be made,” she said.

“The Rohingya are only one of many ethnic groups living there alongside Buddhist Burmese and Burmese Muslims (different from the Rohingya), and these other groups would have their own complaints (founded or unfounded). Simply welcoming humanitarian relief, without saying to which groups this relief will go does not suggest any progress.”

A recent report by the UN human rights office accused Myanmar of seeking to permanently expel the Rohingya, by planting land mines at the border with Bangladesh where the refugees are seeking shelter.

UN rights officials spoke to refugees who gave accounts of soldiers surrounding homes and firing indiscriminately as residents ran for their lives, and of uniformed men gang-raping women and girls, some as young as 5. – with reports from Agence France-Presse/Rappler.com