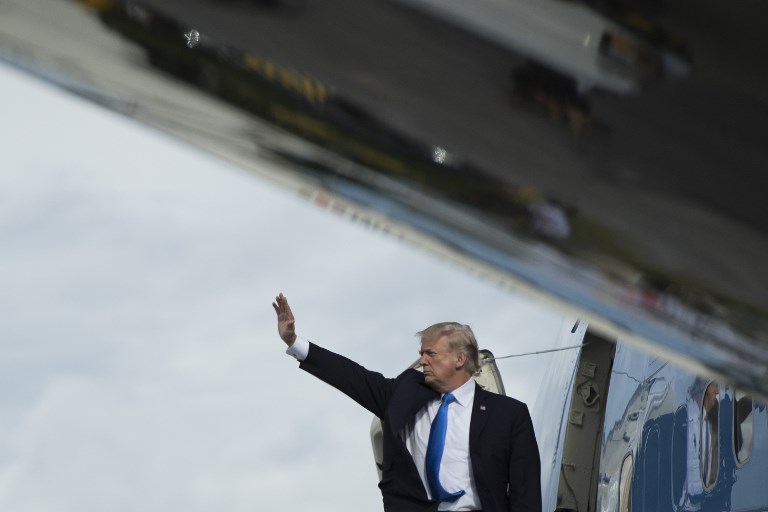 In a statement, the US embassy said that Trump had to leave the Philippines early because “the ASEAN meeting schedule for today was delayed.”

“In order for the President to maintain his departure schedule, he had to leave before the plenary session. He was able to present remarks during the lunch,” said US embassy spokesperson Molly Koscina.

Trump was in the Philippines for the 31st Association of Southeast Asian Nations (ASEAN) Summit and Related Summits, the last stop of his 12-day trip to Asia.

Trump hailed a “tremendously successful” tour in which he made a lot of friends, saying his trip had seen progress in his goal of narrowing America’s yawning trade deficits.

“I’ve made a lot of friends at the highest levels,” Trump told reporters shortly before boarding Air Force One in Manila, adding the trip was “tremendously successful”.

“I think the fruits… are going to be incredible,” he said.

“We’ve explained that the United States is open for trade, but reciprocal trade.”

On November 3, before his departure from the United States, the President decided at the last minute to extend a marathon trip to Asia, after criticism that he was expected to miss the regional summit.

The EAS is viewed as one of the more important meetings, with focus on regional security. It is the culmination of the ASEAN Summit.

But on Tuesday, Trump ended up skipping EAS and boarding Air Force One en route to America.

Before leaving, he briefly gathered with 18 other world leaders ahead of the start of the EAS. However, did not stay for the official start of the summit on Tuesday afternoon, also missing the preceding group photo with his fellow leaders.

Secretary of State Rex Tillerson sat in for him at the summit, which was scheduled to run into the evening.

From Tokyo to Manila

While here, Trump engaged in a bilateral meeting with Philippine President Rodrigo Duterte with whom he struck a friendship, as well as meetings with Australia, India, and Japan.

In a trip that was dominated by the North Korean nuclear crisis, Trump was treated to pomp and pageantry in Japan and South Korea, where he repeatedly blasted the regime of Kim Jong-Un.

In China, where President Xi Jinping rolled out the red carpet for a “state visit plus” — a welcome Trump declared “people really have never seen anything like” — the White House trumpeted more than $250 billion of trade deals.

Analysts say the headline figure hides a paucity of deliverables, with lots of the agreements being non-binding memorandums of understanding.

Many will take years to yield results and some will never materialize.

At a regional summit in Vietnam, Trump returned to the topic of North Korea in what aides said was part of a strategy of forging a global front to persuade Pyongyang to abandon its weapons program.

But the issue of alleged Russian interference in his 2016 election reared its head again when Trump appeared to endorse President Vladimir Putin’s assertion that there had been no plot by Moscow. – With reports from Natashya Gutierrez and Agence France-Presse / Rappler.com