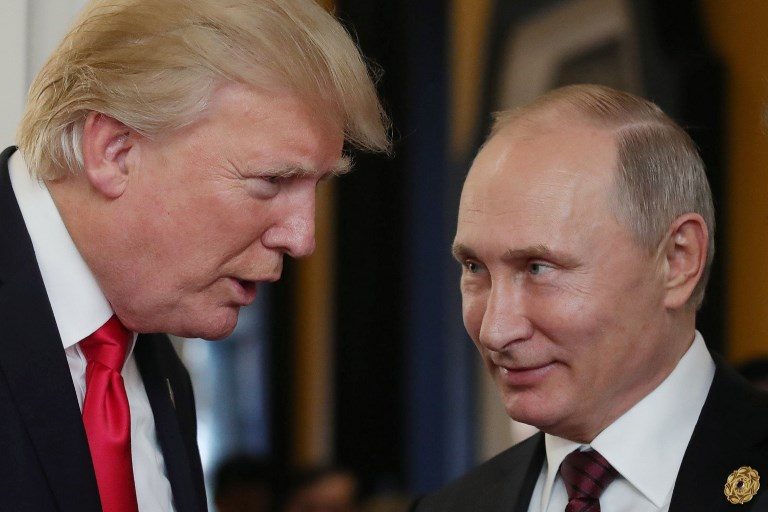 SOCHI, Russia – Russian President Vladimir Putin discussed Syria on Tuesday, November 21, with his US counterpart Donald Trump, with both speaking of the need for progress toward a peace settlement following the Russian leader’s surprise summit with Bashar al-Assad.

Putin’s talks with Assad were part of Moscow’s effort to reboot the Syrian peace process, after military successes on the ground.

Putin’s flurry of diplomacy also included phone talks with Saudi Arabia’s King Salman and the leaders of Egypt and Israel, ahead of a trilateral summit with the presidents of Turkey and Iran on Wednesday, November 22.

Putin informed Trump of “the main results” of his meeting with Assad, held in the Black Sea resort of Sochi on Monday, “at which the Syrian leader confirmed his commitment to the political process, (and) conducting constitutional reform and presidential and parliamentary elections,” the Kremlin said.

During the phone call with Trump the Kremlin said Putin stressed the “need to keep Syria’s sovereignty, independence and territorial integrity intact.”

A political settlement in Syria should be based on principles to be worked out during an all-inclusive “internal negotiating process”.

The White House called for the need to ensure “the stability of a unified Syria,” a statement said.

The aim is “to peacefully resolve the Syrian civil war, end the humanitarian crisis, allow displaced Syrians to return home and ensure the stability of a unified Syria free of malign intervention and terrorist safe havens,” it added.

But there was no mention of Assad’s future.

In his talks with the Saudi king, Egyptian President Abdel Fattah al-Sisi and Israeli Prime Minister Benjamin Netanyahu, Putin touted Moscow’s recent initiative to bring Assad’s regime and its opponents together for a “congress.”

Different factions of the Syrian opposition will meet from Wednesday in Riyadh in talks hosted by Saudi Arabia.

The aim of the Saudi-backed High Negotiations Committee is to reach consensus on a strategy for UN-backed talks in Geneva, which will focus on a new constitution for Syria and fresh elections.

Analysts say that Russia’s decision to intervene militarily in Syria in 2015 appears to have saved Assad’s regime but a peace settlement seems ever more elusive.

Billed as a “working visit”, the meeting between Putin and Assad in Sochi was their first meeting in two years, after the Syrian leader travelled to Moscow in 2015 to thank Putin for his decision to intervene in Syria.

“As for our joint work in the fight against terrorism in Syria, this military operation is coming to an end,” Putin said in comments released Tuesday.

‘Syria has been saved’

“Thanks to the Russian army, Syria has been saved as a state. Much has been done to stabilise the situation in Syria,” Putin said.

“We don’t want to look back and we are ready for dialogue with all those who want to come up with a political settlement,” Assad said in translated comments.

Russia’s army chief of general staff, Valery Gerasimov, was quoted by national news agencies as saying that “despite the fact that there remains a raft of unresolved problems” the military stage “is coming to its logical conclusion”.

The meeting comes as Ankara, Moscow and Tehran cooperate with increasing intensity on ending the civil war in Syria that has claimed some 330,000 lives and made millions homeless.

The trio are cooperating despite Turkey still officially being on an opposite side in the Syrian conflict from Russia and Iran.

Russia, Iran and Turkey have backed negotiations in the Kazakh capital Astana that have brought together the representatives of the opposition and the regime.

The talks led to the creation of four so-called “de-escalation zones” that produced a drop in violence, but fighting and bombardments continued.

Moscow’s military intervention in Syria in 2015 is widely seen as tipping the balance in the conflict.

Since then the Syrian army has reclaimed the ancient city of Palmyra from the Islamic State and driven rebels out of their northern bastion Aleppo.