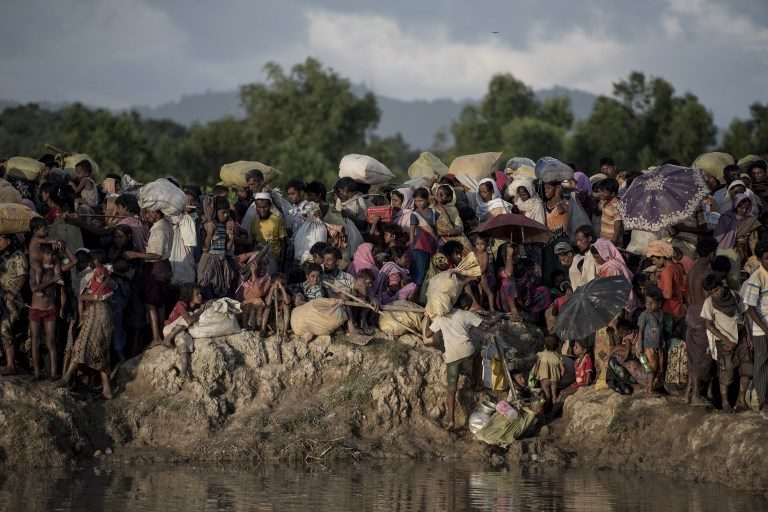 YANGON, Myanmar (3rd UPDATE) – Bangladesh and Myanmar will start repatriating refugees in two months, Dhaka said Thursday, November 23, as global pressure mounts over a crisis that has forced more than 600,000 Rohingya to flee across the border.

The United Nations says 620,000 Rohingya have arrived in Bangladesh since August to form the world’s largest refugee camp after a military crackdown in Myanmar that Washington has said clearly constitutes “ethnic cleansing”.

The statement from Secretary of State Rex Tillerson is the strongest US condemnation yet of the crackdown, accusing Myanmar’s security forces of perpetrating “horrendous atrocities” against the group.

In a brief statement, Dhaka said they had agreed to start returning the refugees to mainly Buddhist Myanmar in two months.

It said that a working group would be set up within 3 weeks to agree the arrangements for the repatriation.

“This is a primary step. (They) will take back (Rohingya). Now we have to start working,” Ali told reporters in Naypyidaw.

Impoverished and overcrowded Bangladesh has won international praise for allowing the refugees into the country, but has imposed restrictions on their movements and said it does not want them to stay.

Suu Kyi’s office called Thursday’s agreement a “win-win situation for both countries”, saying the issue should be “resolved amicably through bilateral negotiations”.

However, it remains unclear how many Rohingya will be allowed back and how long the process will take.

Rights groups have raised concerns about the process, including where the minority will be resettled after hundreds of their villages were razed, and how their safety will be ensured in a country where anti-Muslim sentiment is surging.

The stateless Rohingya have been the target of communal violence and vicious anti-Muslim sentiment in mainly Buddhist Myanmar for years.

They have also been systematically oppressed by the government, which stripped the minority of citizenship and severely restricts their movement, as well as their access to basic services.

Tensions erupted into bouts of bloodshed in 2012 that pushed more than 100,000 Rohingya into grim displacement camps.

Despite the squalid conditions in the overcrowded camps in Bangladesh, many of the refugees say they are reluctant to return to Myanmar unless they are granted full citizenship.

“We won’t go back to Myanmar unless all Rohingya are granted citizenship with full rights like any other Myanmar nationals,” said Abdur Rahim, 52, who was a teacher at a government-run school in Buthidaung in Myanmar’s Rakhine state before fleeing across the border.

“We won’t return to any refugee camps in Rakhine,” he told Agence France-Presse in Bangladesh.

The signing of the deal came ahead of a highly-anticipated visit to both nations from Pope Francis, who has been outspoken about his sympathy for the plight of the Rohingya.

The military denies all allegations but has restricted access to the conflict zone.