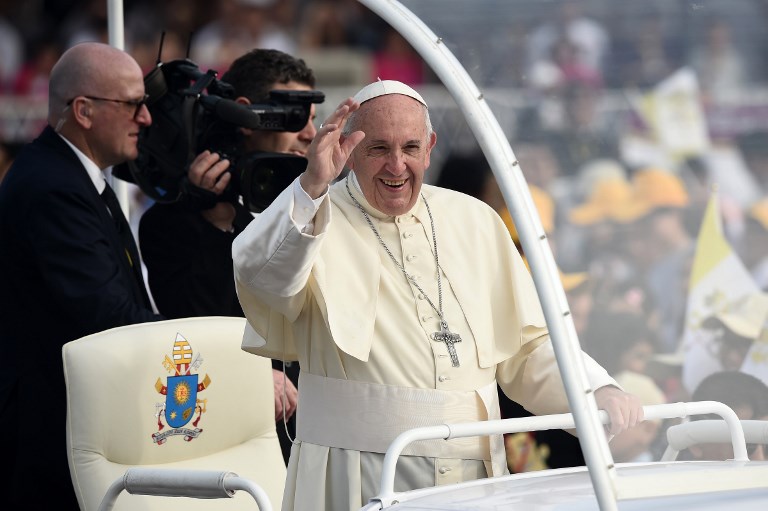 YANGON, Myanmar (3rd UPDATE) – Pope Francis spread a message of forgiveness in a historic open-air mass before a sea of worshippers in Yangon on Wednesday, November 29, during a visit to conflict-torn Myanmar that has been framed so far by his public sidestepping of the Rohingya crisis.

Ranks of nuns sang in Latin, accompanied by organ music, as Francis – making the first papal visit to the mainly Buddhist nation – delivered a homily urging compassion, opening his speech with “minglabar”, Burmese for “hello”.

“I can see that the Church here is alive,” he said of a Catholic community numbering around 700,000 – a tiny fraction of the country’s 51 million people.

Earlier, Francis smiled and waved as he moved through the estimated 150,000 faithful in his “popemobile”. Many worshippers held Myanmar flags and wore colourful costume from the country’s myriad ethnic groups.

“I never dreamed I would see him in my lifetime,” said Meo, an 81-year-old from the Akha minority in Shan state.

Like many others at the mass she hails from one of Myanmar’s conflict-riddled borderlands, where minority groups have long been marginalized by the Buddhist-dominated state.

In his homily, the pontiff noted that many Myanmar people “bear the wounds of violence, wounds both visible and invisible.”

But he urged his audience to forgo anger and respond with “forgiveness and compassion”.

The pope is set to hold a meeting with Buddhist leaders later Wednesday, on a visit that has strong political as well as religious overtones.

The pontiff arrived on Monday, November 27, in a country on the defensive after an outcry from the international community over the plight of its Rohingya Muslim minority, who have been driven to Bangladesh in huge numbers.

He held private talks with both civilian leader Aung San Suu Kyi and the powerful army chief Min Aung Hlaing, who are part of a delicate power-sharing arrangement as the country emerges from decades of junta rule.

Francis avoided mentioning the crisis – or the Rohingya – directly in a speech in the country’s capital Naypyidaw on Tuesday, November 28, calling simply for “respect for rights and justice”.

His caution so far on a 4-day trip will bring relief to Myanmar’s Catholic leaders, who had urged the pontiff not to wade into the treacherous issue for fear of sparking a backlash from Buddhist hardliners.

Even the mention of the name Rohingya is incendiary to many among the majority-Buddhist population, who deny the group are a distinct minority and insist on calling them “Bengalis”.

Reactions to the pope’s handling of the issue have been mixed, with some Rohingya expressing disappointment that he did not draw direct attention to their suffering as he had done in several appeals from abroad.

But Kyaw Min, a former MP and prominent Rohingya activist, said he understood the pressures the pope was under and the pontiff had managed to speak about the group’s plight indirectly.

“He said there were some people who have been bullied and need to get their rights … this was about the Rohingya,” Kyaw Min told Agence France-Presse.

A military crackdown has forced more than 620,000 Rohingya over the last three months to flee their homes in northern Rakhine state to one of the world’s biggest refugee camps in neighboring Bangladesh.

The army has justified the campaign as a proportionate retaliation for deadly attacks by hardline Rohingya militants in August.

But the UN and the US have labelled it ethnic cleansing and rights groups accuse the military of crimes against humanity, with refugees recounting consistent reports of murder, rape and arson.

On December 5 the UN’s Human Rights Council will hold a special session to discuss the Rohingya crisis.

There have been Catholics in Myanmar for over 500 years and they generally enjoy good relations with the Buddhist majority.

In the last three years, the Vatican has canonized Myanmar’s first saint and named its first cardinal before full diplomatic ties were established in May this year, paving the way for the pontiff’s visit.

“When we heard the sound of his words, we could tell they came from the heart, and that gave us peace,” 47-year-old Yangon resident Ko Ko Lay told Agence France-Presse, after the mass had finished. – Rappler.com