Obama takes on Trump and men in general at Paris event 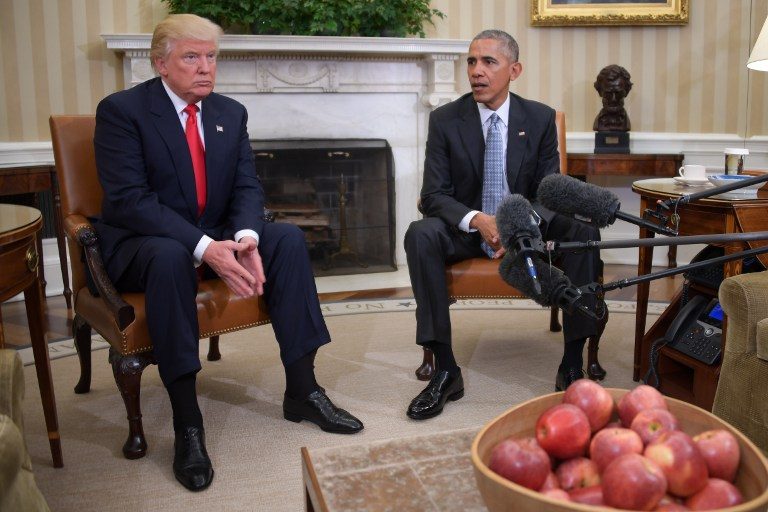 Facebook Twitter Copy URL
Copied
Asked to list leadership qualities for the future, former US president Barack Obama says: 'More focus on putting women in power, because men seem to be having some problems these days'

PARIS, France – Former US president Barack Obama on Saturday, December 2 took a new swipe at his successor Donald Trump over the Paris climate accord at a meeting with business leaders in the French capital.

Obama also vouched for the superiority of female leadership as “men seem to be having some problems these days,” alluding to the sexual assault and harassment scandals currently engulfing the United States.

Speaking to a group of communications and media leaders, as well as financiers and academics known as Les Napoleons, Obama regretted what he called a “temporary absence of American leadership” on climate change.

He was referring to Trump’s threat to withdraw from the 2015 Paris climate accord, the day after making similar remarks during a visit to New Delhi.

Trump has said the accord is crippling US business and has called for the agreement to be renegotiated.

Asked to list leadership qualities for the future, Obama advocated “more focus on putting women in power, because men seem to be having some problems these days.”

“Not to generalize, but women seem to have a better capacity than men do, partly because of their socialization,” said the 56-year-old Democrat who left office in January.

Obama also used the occasion to hone his post-presidential vision of hope and change as he seeks to build support for the foundation he launched in September.

“If we can adapt to change we can make extraordinary progress. Hope is not being blind to problems,” Obama said. “Hope is facing problems and then still believing that we can work them out.”

He insisted that the world is “healthier, wealthier and less violent than at any time in human history,” with “only a few things that are irreversible.”

But he also warned of the dangers of “deeply embedded inequality”.

“Going forward we need to modernize our economies in a way that is inclusive,” he said.

Obama lunched earlier Saturday with Emmanuel Macron, meeting him for the first time after backing the French leader’s presidential campaign.

Macron had rolled out the red carpet for Trump in July, hosting him as guest of honor for Bastille Day celebrations when he sought – unsuccessfully – to change the US leader’s mind on pulling out of the Paris climate change agreement.

“We discussed the big challenges of the planet and especially the subject of the climate. We are confident the accord will be implemented,” Hollande tweeted afterward.

Hidalgo said the C40, an international network of mayors that she heads, would build ties with the Obama Foundation focusing on climate change.

Obama was seen as a major catch for Les Napoleons, a relatively unknown networking group set up in 2014 and claiming a membership of some 3,000.

The former US president’s fee has not been disclosed, but a rampant rumor mill suggested the figure of $400,000 ($1=P50), the paycheck Obama cashed after speaking to a Wall Street bank in September. – Rappler.com