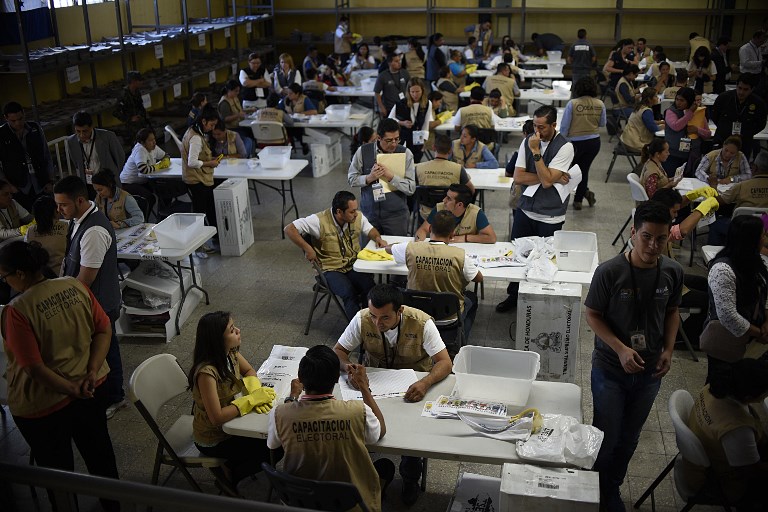 TEGUCIGALPA, Honduras – Thousands of Hondurans took to the streets in protest against “electoral fraud” Sunday, December 3, as vote counting resumed a week after President Juan Orlando Hernandez and opposition candidate Salvador Nasralla went head to head in the polls.

Supreme Electoral Tribunal (TSE) president David Mataramos announced a review of 1,006 votes presenting inconsistencies – despite the opposing Alliance Against the Dictatorship calling for 5,173 votes to be scrutinized.

“We feel that the Honduran people deserve the results and this (count) cannot be stopped,” Mataramos said.

Nasralla supporters in the capital Tegucigalpa marched near to where the count was resumed, banging on pots, blaring vuvuzelas and singing campaign songs including insults towards Hernandez.

Meanwhile, a group of women handed out flowers to demonstrators, and threw petals at riot and military police nearby.

On Friday, December 1, 19-year-old Kimberly Fonseca was killed by a bullet during a confrontation between protesters and the police. Her family say she was killed by police, a claim authorities are “exhaustively” investigating.

After the violent protests erupted – with some reports of looting – the government declared a state of emergency and imposed a 10-day curfew in an attempt to curb the unrest.

The Inter-American Commission on Human Rights and the UN Office for Human Rights in Honduras Sunday urged the authorities to act “within the framework of human rights, respecting people’s lives and physical integrity.”

Their joint statement also expressed concern at preliminary figures which said 11 people have died and at least 15 others have been injured during the violence.

A week after the election, Hernandez maintains an advantage with 42.92% of votes against Nasralla’s 41.42%, with 94.45% counted, according to the TSE.

The first partial election results were released early Monday, November 27, 10 hours after the polls closed. However, when the figures began to be updated on Tuesday, Hernandez’s lead was falling and he took charge of the count on Wednesday, following a series of interruptions in the TSE’s computer system. – Rappler.com