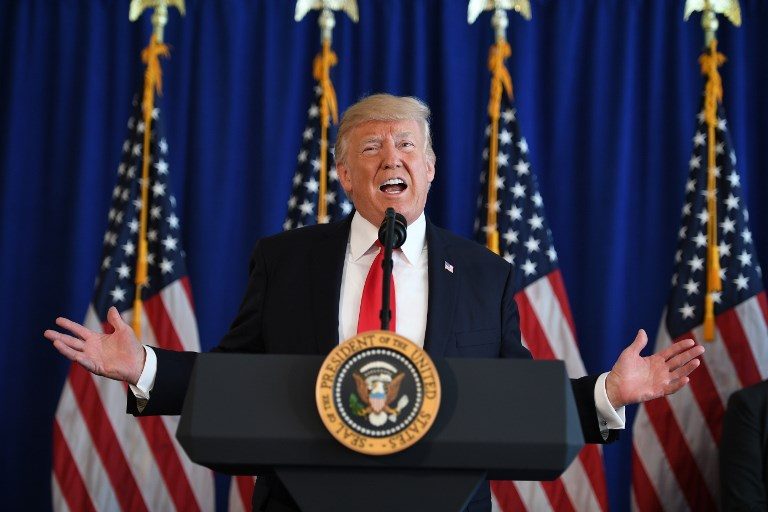 Facebook Twitter Copy URL
Copied
A CNN report's timing is off by a single digit, leading US President Donald Trump to rail against the media for their reporting

WASHINGTON, DC, USA – Donald Trump on Saturday, December 9, renewed his onslaught against major US news networks, accusing them of launching a “vicious” assault on his presidency as he seized on a reporting error by CNN.

In an early-morning tweet, the US president said “Fake News CNN made a vicious and purposeful mistake yesterday. They were caught red handed, just like lonely Brian Ross at ABC News.”

Trump sounded the same anti-media narrative in a speech Friday in Florida when, pointing to a reporting error by ABC, he said, “Did you see all the corrections the media’s been making? They’ve been apologizing left and right.”

The US president regularly rails against top news outlets, both broadcast networks and newspapers including the New York Times and the Washington Post.

CNN reported early Friday that the president and son Donald Trump Jr. had received an email providing a web address and decryption key allowing access to hacked documents from the WikiLeaks site before such documents were publicly available.

But the network’s timing was wrong, by a single digit. It soon posted a correction saying the information had been sent to the Trumps not on September 4, 2016, but on September 14 – a day after WikiLeaks made the documents public, a crucial difference.

Trump tweeted Saturday: “Watch to see if @CNN fires those responsible, or was it just gross incompetence?”

ABC, for its part, recently suspended investigative journalist Brian Ross for reporting erroneously that Trump had directed adviser Michael Flynn to make contact with Russia before the November election, when in fact the directive came afterward.

In one tweet Saturday, Trump said Ross should “be immediately fired.”

The WikiLeaks link sent to the Trumps – from a man identified by the Washington Post as Michael Erickson, head of an aviation firm – provided access to documents hacked from the Democratic National Committee, some of which were used during the Trump campaign to undercut Democratic rival Hillary Clinton.

It has been reported earlier that Trump Jr. had contacts with WikiLeaks, the anti-secrecy group, during the campaign and that he met in June 2016 with Russians who said they had damaging information about Clinton.

But CNN’s mistake Friday – as well as an error in June about a Trump aide, which prompted 3 CNN journalists to resign – has given the president an opening to blast the network, and the news media more broadly, as biased and lacking credibility.

He has tweeted, or retweeted, a video showing him knocking down a wrestler representing “CNN,” and another showing a train smashing into a CNN logo.

His barrage of attacks against the news media has brought complaints from media advocates and free-speech groups.

It has also raised suggestions that Trump is attempting, as investigations probe further into his links to Russia, to preemptively discredit the purveyors of that news. – Rappler.com