Dec 20, 2017 8:43 PM PHT
Agence France-Presse
Facebook Twitter Copy URL
Copied
Never before used, article 7 proceedings are seen as a 'nuclear option' against an EU member state as they can lead to a suspension of voting rights at the European Council 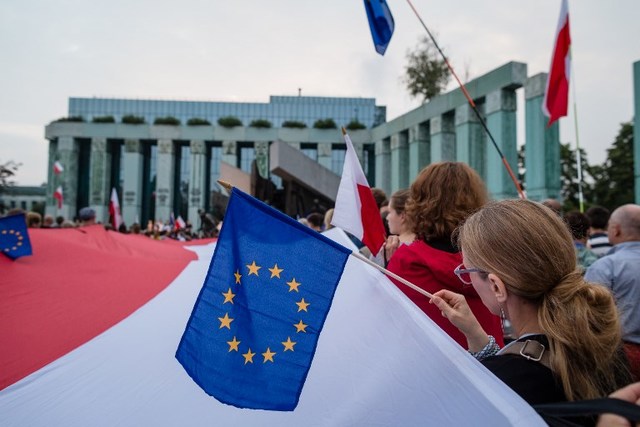 The bloc’s executive arm triggered article seven of the EU treaty over what it sees as “systemic threats” to the independence of the Polish judiciary from the right-wing government.

Never before used, article 7 proceedings are seen as a “nuclear option” against an EU member state as they can lead – albeit at the end of a complex process – to a suspension of voting rights at the European Council.

“It is with a heavy heart that we have decided to initiate Article 7.1. But the facts leave us with no choice,” Commission Vice President Frans Timmermans told reporters in Brussels.

The Dutch commissioner said that 13 laws adopted by Poland in the space of two years had created a situation where the government “can systematically politically interfere with the composition, powers, the adminstration and the functioning” of judicial authorities.

But Timmermans gave Warsaw 3 months to remedy the situation, saying Brussels could withdraw the measures if it did.

Poland’s right-wing Law and Justice (PiS) government began making changes to the judiciary after coming to power in late 2015 and says the reforms are needed to combat corruption and overhaul the judicial system still haunted by the communist era.

Brussels has repeatedly warned Warsaw that it views the changes as a threat to the democratic principles and rule of law Poland signed up to when it joined the European Union.

The initial phase set in motion by the EU’s commission, the bloc’s executive arm, allows member states to “determine that there is a clear risk of a serious breach” of the rule of law. Such a ruling would need the backing of 22 states.

Any possible sanctions would only come at a second stage and would need unanimous support of all EU members — apart from Poland.

Hungary has already said it would veto such a move, making sanctions unlikely, but Brussels is hoping the start of proceedings will have significant symbolic power.

Council of Europe Commissioner for Human Rights Nils Muiznieks has said the new reforms will undermine judicial independence by making judges “subordinate” to the executive and legislature.

As well as heavy criticism from Brussels, the reforms have sparked street protests in Poland and concern from the US State Department.

Warsaw and the EU have clashed over the reforms for more than a year with little result. Poland has refused to implement the “recommendations” from Brussels, defending its right to clean up what it says is a corrupt judicial “caste”.

“I am firmly convinced that sovereign states — and Europe must be a Europe of sovereign states — have an absolute right to reform their judicial systems,” Poland’s new Prime Minister Mateusz Morawiecki said last week, sticking to the line of his eurosceptic predecessor Beata Szydlo.

In the face of this doggedness, the commission has been threatening to trigger article seven for months, but given that the threat of sanctions is no more than theoretical, the EU is trying to come up with other ways of getting Poland to comply.

One idea is to link access to European funding for major infrastructure projects to respect for EU values and rulings.

“A country that is drifting away from the rule of law cannot at the same time ask Brussels to be supported by billions (of euros) in funding,” France’s Europe Minister Nathalie Loiseau said this week. – Rappler.com