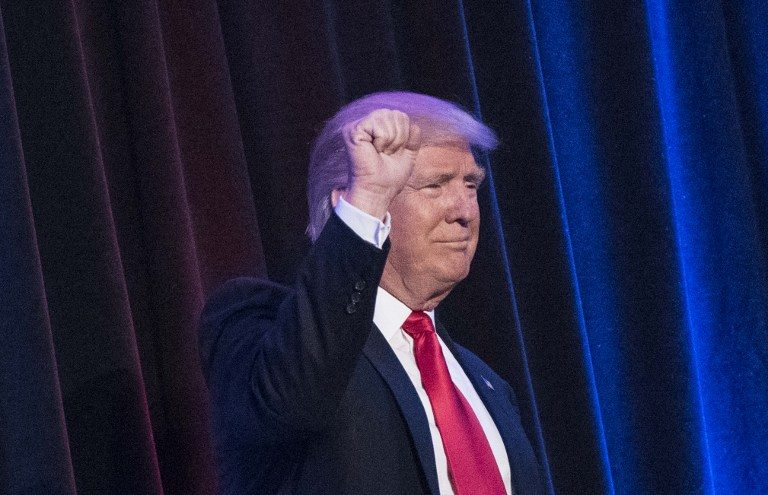 The House of Representatives voted along party lines to greenlight a $1.5 trillion overhaul that will impact every corner of the US economy through dramatic tax cuts for corporations and temporary reductions for individuals.

Opposition Democrats have branded the tax plan a giveaway to the wealthiest that risks blowing a hole in the national debt, but the revamp fulfills a core Trump campaign pledge to redirect money from government coffers into the pockets of working Americans.

“We broke every record,” a jubilant Trump told scores of elated Republicans gathered at the White House for a victory lap, thanking them for driving through “the largest tax cut in the history of our country.”

“We are making America great again,” he declared, in a melee of smiles and handshakes with lawmakers – who took turns to sing the president’s praises.

The most sweeping rewrite of the US tax code in decades, the bill represents Trump’s most important legislative victory in the 11 months since his inauguration, until now marked by the stinging failure to repeal his predecessor’s health care law.

Billing it as a “Christmas gift” and a “history victory” for the American people, Trump and his Republicans hope their success in passing tax cuts plays to the party’s advantage in next year’s mid-term elections.

The Tax Cuts and Jobs Act also takes a major step toward crippling Obamacare, by scrapping the individual mandate that requires nearly all Americans to have health insurance or pay a fine.

“With this bill…we have essentially repealed Obamacare and we will come up with something that’s much better,” Trump declared.

Trump earlier gathered his cabinet members for a meeting where he discussed the tax accomplishment, and that gave way to an extraordinary scene as the president invited those present to join in prayer.

“We’re thankful for the unity in Congress that has presented an opportunity for our economy to expand so that we can fight corrosive debt that has been destroying our future,” Carson intoned.

Changing minds
Having taken months to get across the finish line, the bill was delayed at the last moment Tuesday after a technical glitch required the Senate to strip three minor provisions from the bill before approving it overnight.

Since the House had already voted – and the versions approved by both chambers must be identical – it was forced to vote again on the changes. The bill passed the House 224 to 201, with 12 Republicans siding with all Democrats in voting no.

The measure tests conservatives’ fidelity to the principle of fiscal discipline, as it is projected to add nearly $1.5 trillion to the national debt over the coming decade, according to the Joint Committee on Taxation.

That figure drops to about $1 trillion when economic growth is accounted for.

Trump had leaned heavily on Republicans to push the contentious package through Congress. The party had been deeply fractured after the Obamacare repeal failure, and the prospects of success on tax reform in 2017 appeared remote.

The reform remains unpopular: a CNN poll shows that 55 percent of Americans oppose the tax plan, widely criticized as favoring wealthy people over the middle class, while just 33 percent support it.

But Republicans have pushed back at that notion, with Ryan predicting that Americans would be won over once they start to reap the benefits next year.

“I think people are going to change their view on this,” he said.

The tax bill slashes the federal corporate tax rate from 35% to 21%, and the maximum individual income tax rate, for the nation’s wealthiest, would drop from 39.6%t to 37%.

It also doubles the standard deduction for families, and doubles the child tax credit, while eliminating or limiting several deductions currently claimed by millions of middle-class families.

Economic ‘rocket fuel’
Ryan stated that a median-income family of four earning $73,000 annually would save $2,059 in taxes next year.

But he could not say whether the tax cuts would generate enough economic growth to pay for themselves.

Trump, however, was bullish. “By cutting taxes and reforming the broken system, we are now pouring rocket fuel into the engine of our economy,” he said.

“It is a victory for billionaires like Donald Trump…but this is a disaster for the American people,” independent Senator Bernie Sanders told CNN.

Under the law, the corporate tax cuts are permanent, while those for individuals phase out beginning in 2026. By 2027, the Tax Policy Center warns, 53 percent of households will see their taxes rise. – Rappler.com