Dec 22, 2017 7:32 PM PHT
Agence France-Presse
Facebook Twitter Copy URL
Copied
Rights groups say the case of Tran Thi Nga is part of a protracted crackdown on dissent that has accelerated under the conservative communist leadership in place since last year 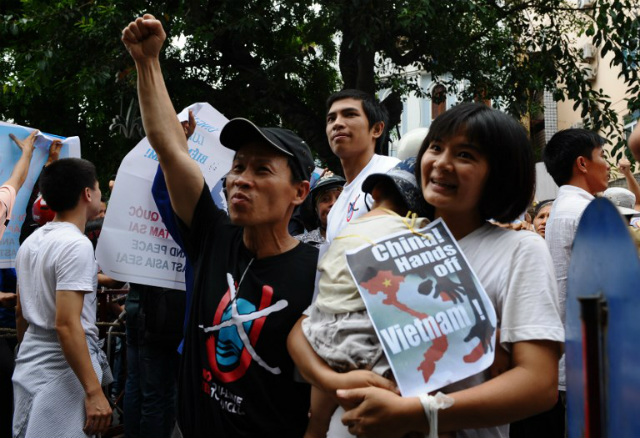 HANOI, Vietnam – A Vietnamese court on Friday, December 22, rejected the appeal of a dissident sentenced to 9 years for anti-state propaganda, capping a grim year for activists in the one-party state.

Vietnam’s communist government has been accused of intensifying a crackdown on its critics in 2017, jailing at least 15 activists and handing down heavy jail terms.

The latest to be punished is anti-China activist Tran Thi Nga, 40, who was handed 9 years in prison plus 5 years of probation in July for posting material online criticizing the government.

Her appeal was rejected Friday after a trial in northern Ha Nam province.

“The verdict is biased and not objective,” Nga’s lawer Ha Huy Son told Agence France-Presse after the hearing.

Several of Nga’s supporters gathered outside the courthouse were ferried away by security forces earlier Friday, according to activists’ posts on Facebook.

Nga, who was arrested in January, is best known for calling on the Vietnamese government to stand up to its massive neighbor China over over territorial disputes in the resource-rich South China Sea.

She also rallied for land and labor rights and protested the government’s handling of a massive toxic dump in central Vietnam last year that killed tons of fish.

Rights groups say her case is part of a protracted crackdown on dissent that has accelerated under the conservative communist leadership in place since last year.

On Thursday, December 21, 5 people in southern An Giang province were jailed for between three and five years for “anti-state propaganda” after they hung flags of the former South Vietnamese regime in several locations across Chau Doc city, according to state media and a court clerk who confirmed the sentencing to Agence France-Presse.

The flag is considered an incendiary symbol by communist authorities and has been banned since the end of the Vietnam War.

Ahead of Nga’s appeal, Human Rights Watch called on authorities to drop charges against the activist and release more than 100 others currently in jail.

“Tran Thi Nga and other Vietnamese activists put themselves at grave risk to speak out against rights violations happening in their country,” said Brad Adams, HRW’s Asia director.

“Vietnam’s friends and donors need to honour their fight by pushing for their unconditional release.” – Rappler.com