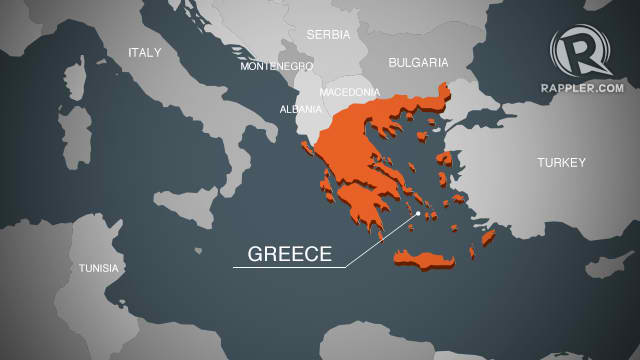 ATHENS, Greece – A bomb exploded early Friday, December 22, outside one of Greece’s main courthouses, causing material damage but no injuries, with police suspecting a far-left group of setting it off to protest property foreclosures sought by debt-laden banks.

The explosion occurred at 0125 GMT outside the Athens appeals court after calls warning of a bomb were made to media outlets, police said.

The blast broke several windows and caused extensive damage to the court’s front entrance, where part of the first floor appears to have collapsed.

Windows at nearby buildings were also shattered.

The attack took place just 3 blocks from the Athens police headquarters, yet the assailants were able to escape.

The bomb was inside a backpack left at the building’s entrance by two men who then fled in a small van, a police source told Agence France-Presse

When a guard inside the building ran towards them, a 3rd person waiting in the van fired a shot at him, but the guard was not hurt, the police said.

It is believed that 4 people took part in the attack.

Police suspect that a far-left group calling itself the Popular Fighters Squad (OLA), which carried out shooting attacks against the Israeli embassy in 2014 and the German ambassador’s residence in 2013, was behind Friday’s bombing.

In 2015, the group exploded a bomb outside the Greek Federation of Enterprises, the country’s top industrial lobby.

In a later statement, the police said the bullet casing was from an assault rifle. The OLA has used an AK-47 Kalashnikov rifle in past attacks.

And the minivan used in the attack had been stolen in 2015, the police said.

There was no immediate claim of responsibility.

Prime Minister Alexis Tsipras said the country would “not be terrorised by bullets, bombs or hoods” as judges also vowed not to be cowed.

“Judges and prosecutors are focused on their consitutional duty and are not discouraged by such criminal acts,” the judges association said.

The attack early Friday occurred amid a bitter row over foreclosures on properties whose owners have longstanding debts to Greek banks.

The government has proposed new legislation which toughens rules against anti-foreclosure protesters, and the bill was approved by parliament on Thursday.

Foreclosure sales are now increasingly being held online after successive protests, spearheaded by leftist groups, blocked property auctions over the past year.

The protests prompted Greek notaries to repeatedly go on strike to protest a lack of state protection.

Greek banks are burdened by around 100 billion euros ($119 billion) of loans in or near default — about half of overall lending — and the issue has repeatedly been highlighted by the European Central Bank.

The notaries say that family homes are protected under a 2010 law that is annually renewed, and that the anti-foreclosure protests have mainly aided wealthy debtors playing the system to their advantage. – Rappler.com