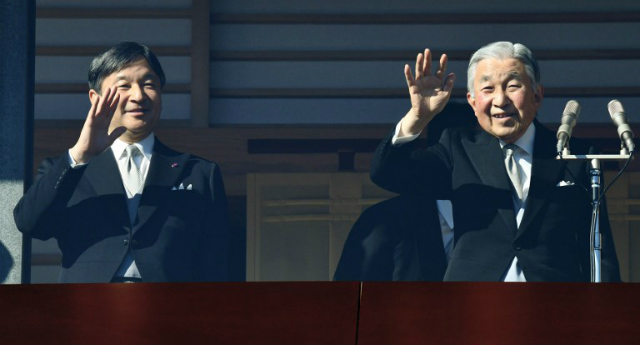 TOKYO, Japan – Record crowds flocked to Japan’s Imperial Palace on Saturday, December 23, to celebrate the 84th birthday of Emperor Akihito as he prepares to abdicate in April 2019.

Around 45,900 people – the biggest birthday crowd of the emperor’s three-decade reign – thronged the palace for his address, according to the Imperial Household Agency, waving small Japanese flags in the winter sunshine and shouting “Banzai” or “long live”.

The softly-spoken monarch greeted well-wishers from a glass-covered balcony overlooking the East Garden, flanked by Empress Michiko and other members of the royal household.

It was Akihito’s first public appearance at the palace since the government earlier this month announced the date for his abdication as April 30, 2019.

The emperor shocked the country last year when he signalled his desire to take a back seat after nearly three decades in the job, citing his age and health problems.

He will be the first emperor to retire in more than two centuries in the world’s oldest imperial family.

“I wanted to see his face before he abdicates,” said Rie Aisaka, a female attendee.

The status of the emperor is sensitive in Japan given its 20th century history of war waged in the name of Akihito’s father Hirohito, who died in 1989.

Akihito has keenly embraced the more modern role as a symbol of the state — imposed after World War II ended. Previous emperors including his father, Hirohito, had been treated as semi-divine.

“Over the remaining days, as I continue to carry out my duties as the symbol of the State, I would like to make preparations for passing the torch to the next era,” Akihito said in an interview released by the agency earlier in the day.

The palace, surrounded by stone walls and mossy moats — is opened to the general public twice a year — on the emperor’s birthday and the second day of New Year — for the royal family to greet well-wishers. – Rappler.com