US envoy apologizes after being caught out for ‘fake news’ jibe

Dec 24, 2017 7:54 AM PHT
Agence France-Presse
Facebook Twitter Copy URL
Copied
'I made certain remarks in 2015 and regret the exchange during the Nieuwsuur interview. Please accept my apology,' says new US ambassador to the Netherlands Pete Hoekstra 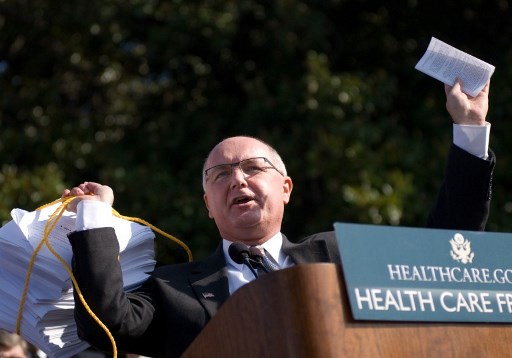 WASHINGTON, United States – The new US ambassador to the Netherlands apologized Saturday, December 23 after denying he once said the country was in “chaos” because of Muslims and accusing an interviewer of peddling “fake news,” only to be caught out by Dutch television in a bizarre exchange.

Pete Hoekstra, who starts as ambassador to The Hague next month, made the blunder while being questioned by a journalist from Dutch broadcaster NOS over remarks made at a 2015 conference.

When the reporter challenged him about referring at that event to Muslim-inspired “chaos” and to dangerous “no-go zones” in the Netherlands, Hoekstra responded: “That is actually an incorrect statement – we would call it fake news. I never said that.”

But in a clip played from the event, Hoekstra can be heard saying: “The Islamic movement has now gotten to a point where they have put Europe into chaos. Chaos in the Netherlands – there are cars being burned, there are politicians that are being burned.”

“And yes, there are no-go zones in the Netherlands.”

When pressed further during the interview, the Dutch-born ambassador denied having accused his interviewer of “fake news” altogether.

“I didn’t call that fake news,” said Hoekstra, a former representative from Michigan. “I didn’t use the words today. I don’t think I did.”

The exchange, which appeared on Dutch current affairs program Nieuwsuur, has circulated on social media, drawing widespread mockery. One tweeter quipped that Hoekstra was “even giving fake news a bad name.”

In a Twitter message Saturday, Hoekstra said: “I made certain remarks in 2015 and regret the exchange during the Nieuwsuur interview. Please accept my apology.”

He vowed to “move on in the spirit of peace and friendship with the people and the leaders of the Netherlands.”

NOS interviewer Wouter Zwart later told CNN that Hoekstra said the “no-go zones” comment was intended to refer to “a broader context of European problems with ‘those areas.'”

The “no-go” reference was reminiscent of remarks by Donald Trump during his campaign for the US presidency.

Blaming Muslims, he said parts of Paris were so radicalized “that the police refuse to go there,” that London police in some districts were “afraid for their own lives” and that parts of Brussels were a “hellhole.” – Rappler.com