Venezuela frees first of 80 opponents in rare good will move

Dec 24, 2017 9:19 AM PHT
Agence France-Presse
Facebook Twitter Copy URL
Copied
(UPDATED) Delcy Rodriguez, the president of the assembly and head of its Truth Commission investigating the protests, says that Christmas is 'a moment of reconciliation' 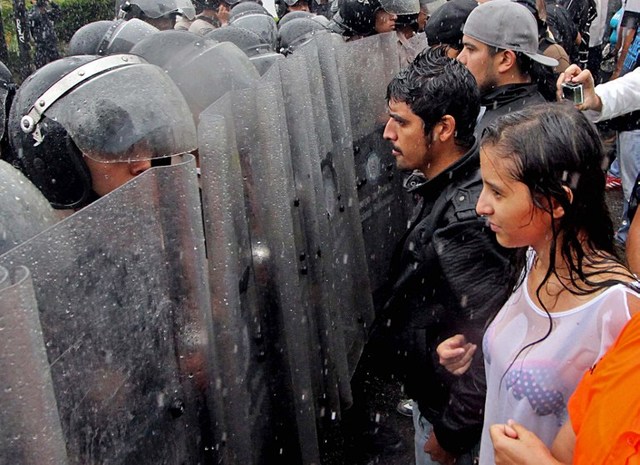 CARACAS, Venezuela (UPDATED) – Venezuelan authorities late Saturday, December 23, began releasing some of those detained during demonstrations against President Nicolas Maduro’s socialist government, a rare goodwill gesture to the opposition at the end of a politically torrid year.

Delcy Rodriguez, the president of the assembly and head of its Truth Commission investigating the protests, said that Christmas was “a moment of reconciliation” as she announced the decision to release around 80 people.

Among the first freed was Alfredo Ramos, mayor of the northwestern municipality of Iribarren, who was arrested late July and handed a 15 month sentence, and a dozen police officers from Chacao municipality, an opposition stronghold of Caracas.

State television showed image of Rodriguez meeting with the group.

“You go back to jail for the medical check and then you go home to spend Christmas with your families,” she said.

“I feel happy for my freedom,” Ramos told journalists upon his release. “It was a hard test, quite difficult.”

But he also lashed out at his sentence.

“It was an arbitrary, unjust detention – I committed no crime,” he added.

Venezuela, whose oil reserves once made it the region’s richest country, has been paralyzed in recent years by economic collapse and political conflict.

Opposition forces accuse Maduro of dismantling democratic institutions and setting up the Constituent Assembly to rubber-stamp his policies, with widespread protests breaking out this year.

Supplies of food and medicine have become scarce, taking an ever-greater toll on people’s health, and hundreds of thousands of Venezuelans have chosen to emigrate.

The fate of those imprisoned has been a subject of negotiations between the government and the opposition Democratic Unity Roundtable (MUD) in the Dominican Republic, as both sides seek a solution to the country’s grave political and economic crisis.

Earlier this week, Venezuelan opposition leaders asked Maduro to free “political prisoners” – whose numbers one non-governmental group has put at 268 – before Christmas as a gesture of good will.

On Thursday, December 21, the regional trade bloc Mercosur also called for their release.

The government has insisted that all are being held for acts of violence, conspiracy or treason, not as “political prisoners”.

Rodriguez said those affected were being held in both civilian and military prisons, and she suggested community service as an alternative to imprisonment.

Some were detained in 2014 protests, and others this year. – Rappler.com