Dec 25, 2017 3:02 PM PHT
Agence France-Presse
Facebook Twitter Copy URL
Copied
'The president of the republic... has decided to grant a humanitarian pardon to Mr Alberto Fujimori and 7 other people in similar condition,' the presidency says in a statement 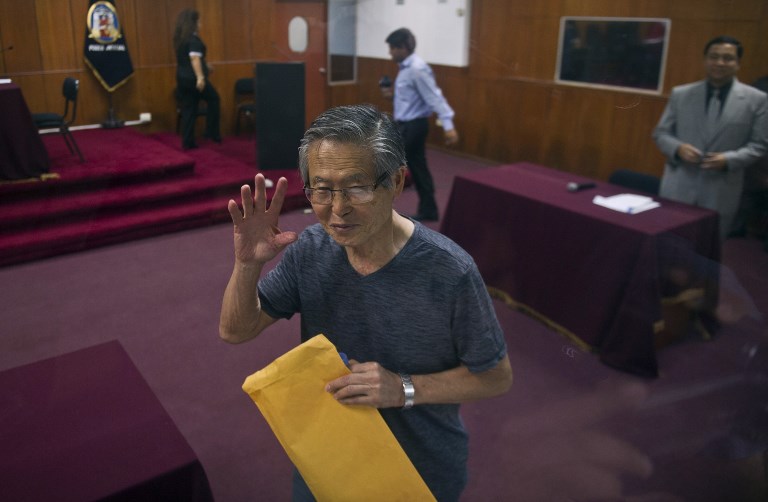 LIMA, Peru – Peru’s jailed ex-president Alberto Fujimori, who was serving a 25-year sentence for corruption and rights abuses, has been pardoned on humanitarian grounds, the presidency said Sunday, December 24.

The announcement came after Fujimori’s son Kenji split the opposition vote in parliament, allowing President Pedro Pablo Kuczynski to avoid impeachment and sparking speculation about a pardon as political payback.

“The president of the republic… has decided to grant a humanitarian pardon to Mr Alberto Fujimori and 7 other people in similar condition,” the presidency said in a statement that did not name the other recipients.

A medical team “determined that Mr Fujimori suffers from a progressive, degenerative and incurable illness and that prison conditions represent a grave risk to his life,” the statement said.

“On behalf of the Fujimori family, I would like to thank President Pedro Pablo Kuczynski for the noble and magnanimous gesture of giving my father Alberto the humanitarian pardon,” he wrote on his Twitter account.

“Today is a great day for my family and for Fujimorism. Finally my father is free. This will be a Christmas of hope and joy!!!”, she wrote on social media.

But the decision sparked criticism from rights groups while in the capital Lima, young demonstrators clashed with riot police as they tried to march to the government palace.

“Instead of reaffirming that in a state of law there is no special treatment for anyone, the idea that his liberation was a vulgar political negotiation in exchange for Pedro Pablo Kuczynski maintaining power will remain forever,” he added.

“Another reprieve for a person convicted of crimes against humanity … a sad night,” was the reaction of Edison Lanza of the Inter-American Commission on Human Rights.

Alberto Fujimori was transferred from his cell to a clinic Saturday, December 23, suffering from low blood pressure and an irregular heartbeat. The 79-year-old had a “sudden drop of pressure with marked arrhythmia,” doctors said.

“He is making adequate progress in the intensive care unit,” said his physician Alejandro Aguinaga. “He will remain hospitalized for as long as necessary, until he has stabilized.”

Fujimori, in office from 1990 to 2000 and imprisoned since 2005, was admitted amid rumors that he could be pardoned this Christmas.

He has been hospitalized on several previous occasions, the last time in September, and has had heart, back and stomach trouble as well as several operations to remove cancerous growths from his tongue.

Despite his conviction for human rights abuses, Fujimori retains a level of popularity in Peru for having defeated guerilas and for stabilizing the economy after a period of crisis.

Under him and his hardline security chief Vladimiro Montesinos, state forces virtually wiped out the leftist Shining Path and Tupac Amaru rebels.

Fujimori also clamped down hard on his political rivals. In 1992 he staged an internal coup, dissolving the legislature with the knowledge of only Montesinos and military chiefs.

Speculation about a pardon arose after Kenji Fujimori broke ranks on Thursday, December 21, with Keiko, who was pushing to impeach Kuczynski.

Kenji, whose softer line has set him at odds with his sister recently, was followed by other deputies from the party whose votes were crucial to securing the impeachment.

That allowed Kuczynski – who was accused of lying to cover up $5 million in payments received from disgraced Brazilian construction firm Odebrecht – to survive the vote.

Keiko lost to Kuczynski in last year’s presidential election and is herself facing questioning linked to the sprawling Odebrecht graft investigation. – Rappler.com