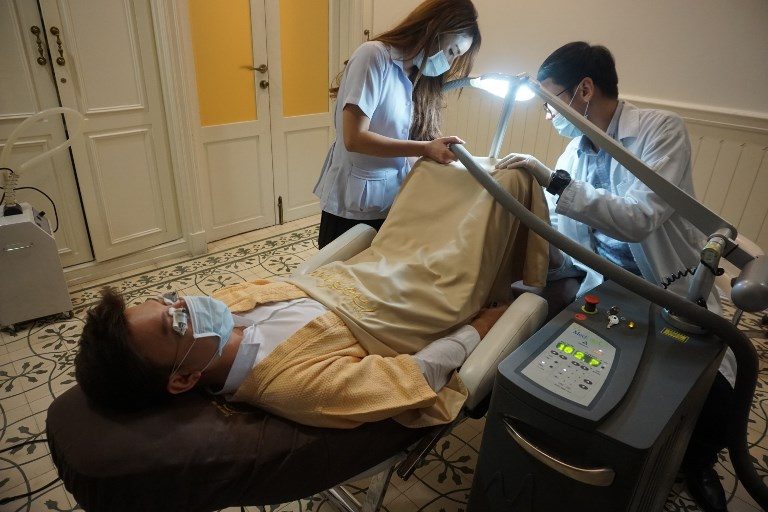 Facebook Twitter Copy URL
Copied
A clinic in Bangkok offers this unconventional treatment for around $650 for five sessions.

BANGKOK, Thailand – A Bangkok clinic that has drawn 100 men a month to its penis whitening service has caused a stir in Thailand, with social media users both baffled and alarmed by the phallic fad.

The Lelux Hospital, renowned for its body whitening expertise in a country obsessed with skin color, began offering the unconventional treatment six months ago after a male customer complained of “dark parts” on his groin.

“These days a lot of people are asking about it. We get around 100 clients a month, three to four clients a day,” Bunthita Wattanasiri, a manager for the Skin and Laser department at Lelux Hospital told AFP.

The procedure, which uses laser whitening, got wide play on Thai television and social media on Thursday, January 4, after the hospital released images of a man undergoing the treatment.

“We have to be careful because it’s a sensitive part of the body,” Bunthita said, adding most clients were aged between 22 and 55-years-old with many from Thailand’s LGBTQ community.

The same hospital stirred controversy last year for touting beautification treatment called a “3D Vagina” in which the customer’s own body fat is used to make genitalia more plump.

The whitening service costs around $650 for five sessions.

“I think it’s a good market to enter so we offer the ultimate body treatment to our clients, either men and women,” Bunthita said.

Whitening and bleaching are not uncommon in other parts of the world and are widely offered online.

But they are particularly sought after in Thailand, where skin-whitening ads have caused outrage and accusations of racism.

Another user Parin Ruansati posted: “Oh god… what ever happened to the world?”

Another had a lighter response, writing “why not?”.  – Rappler.com