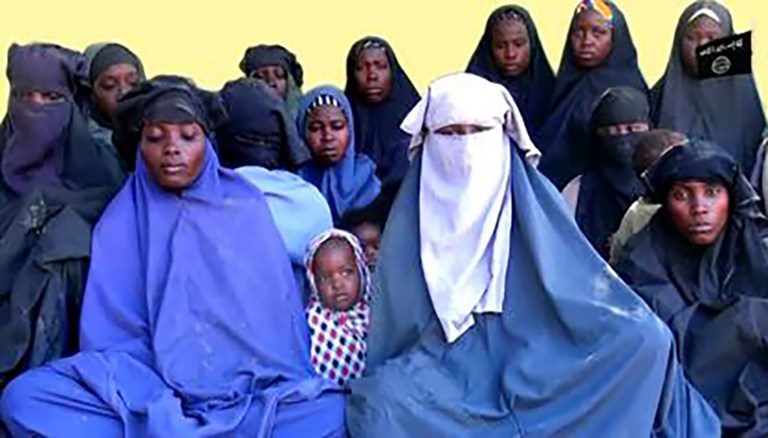 Facebook Twitter Copy URL
Copied
The 20-minute-long video is the first since May last year, when another woman who also claimed to be among the 219 seized from the town in Borno state said she wanted to stay

But despite a concerted global campaign for their release, and talks between the government and the militants, the girls shown in the recording vowed not to return to their parents.

The 20-minute-long video is the first since May last year, when another woman who also claimed to be among the 219 seized from the town in Borno state said she wanted to stay.

Both videos will compound the suffering of the girls’ families and friends but also indicate the extent to which they may have become influenced by their captors.

All of those who were shown on camera were wearing black or blue hijabs and at least 3 were carrying babies.

One of the students, her face covered by a veil, said: “We are the Chibok girls that you cry for us to return to you. By the grace of Allah, we will not return to you.

“Poor souls, we pity our other Chibok girls who chose to return to Nigeria. Allah blessed you and brought you to the caliphate for you to worship your creator.

“But instead you chose to return to unbelief.”

It was not clear when or where the latest message, in Hausa and the local Chibok language, was recorded or whether those who appeared on camera were under duress.

The woman speaking said the Boko Haram factional leader Abubakar Shekau had “married us off.”

“We live in comfort. He provides us with everything. We lack nothing,” she added.

Shekau was also seen, firing a heavy machine gun and making a 13-minute-long sermon in which he said the remaining girls had “understood the folly” of secular education.

Boko Haram’s name broadly translates into English from the Hausa that is widely spoken in northern Nigeria as “Western education is sinful.”

The group has repeatedly attacked and destroyed schools teaching a secular curriculum in its campaign to create a hardline Islamic state in northeast Nigeria.

The jihadists seized 276 students from the Government Girls Secondary School in the mostly Christian town on April 14, 2014, triggering global condemnation.

Fifty-nine of them managed to escape in the hours that followed. A campaign for the release of their classmates has had the support of Hollywood stars to global leaders.

A total of 107 girls have now been either found, rescued or released as part of government negotiations with the Islamic State (ISIS) group affiliate.

They have now returned to the northeast and are back in education at the American University of Nigeria, in the Adamawa state capital, Yola.

On January 4, the Nigerian army said it had rescued another of the girls’ classmates in the Pulka region of Borno, near the border with Cameroon.

Boko Haram has used kidnapping as a weapon of war in the conflict, which has killed at least 20,000 people in northeast Nigeria and displaced more than 2.6 million.

Thousands of women and young girls have been seized and held hostage, including as sex slaves, while men and young boys have been forcibly recruited to fight alongside the militants.

The video also shows a group of police women, who were also abducted in Borno state last year. – Rappler.com