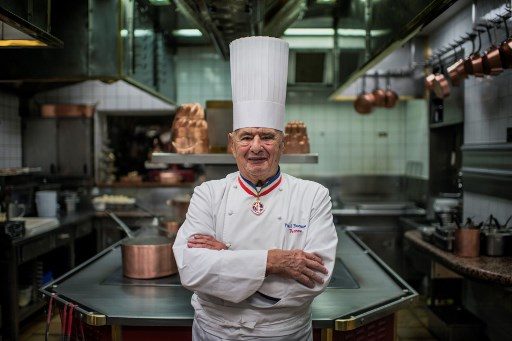 PARIS, France – Paul Bocuse, one of the greatest French chefs of all time, died on Saturday, January 20, aged 91, after a long battle with Parkinson’s disease.

Dubbed the “pope” of French cuisine, Bocuse helped shake up the food world in the 1970s with the Nouvelle Cuisine revolution and create the idea of the celebrity chef.

French President Emmanuel Macron led tributes, calling him a “mythic figure who transformed French cuisine. Chefs are crying in their kitchens across France”.

“He was one of the greatest figures of French gastronomy, the General Charles de Gaulle of cuisine,” said French food critic Francois Simon, comparing him to France’s wartime saviour and dominant postwar leader.

A giant in a nation that prides itself as the beating heart of gastronomy, Bocuse was France’s only chef to keep the Michelin food bible’s coveted three-star rating for more than four decades.

The heart of his empire, L’Auberge de Collonges au Mont D’Or, his father’s village inn near Lyon in food-obsessed southeastern France, earned three stars in 1965, and never lost a single one.

“Monsieur Paul,” as he was known, was named “chef of the century” by Michelin’s rival guide, the Gault-Millau in 1989, and again by The Culinary Institute of America in 2011.

A great upholder of tradition as well as an innovator, several of his trademark dishes at the Auberge remained unchanged for decades including the black truffle soup he created for French president Valery Giscard d’Estaing in 1975, who named him a commander of the Legion of Honour.

Lover of food, wine and women
Born into a family of cooks since 1765, Bocuse began his apprenticeship at the age of 16 and came to epitomise a certain type of French epicurean — a lover of fine wine, food and women.

He slept in the same room where he was born, and managed to maintain a relationship with his wife Raymonde and at least two lovers.

“I love women and we live too long these days to spend one’s entire life with just one,” Bocuse told the Daily Telegraph in 2005.

Polygamy was part of his huge appetite for life, he insisted. Married to Raymonde since 1946, he also shared his life with Raymone – with whom he had a son – and Patricia, who looked after his image for the last 40 years.

Bocuse became a driving force behind Nouvelle Cuisine in the 1970s, sweeping away the rich and heavy sauces of yesteryear in favour of super-fresh ingredients, sleek aesthetics and innovation.

The term was invented by Gault-Millau to describe food Bocuse helped prepare for the maiden flight of the Concorde airliner in 1969.

Slashing cooking times, paring down menus and paying new attention to health, Nouvelle Cuisine was a craze that fizzled out but left a lasting legacy.

“It was a real revolution,” said Simon. “They coined a concept that came at exactly the right moment – at a time when gastronomy was a bit dull and heavy and not sexy at all.”

And he drew the line at Nouvelle Cuisine’s extreme minimalism, saying the label “was more about the bill than what was on the plate”.

Great showman
“Good cooking for me is when you lift up the lid and it smells delicious, and you reach for a second helping,” Bocuse wrote a few years before his illness struck.

His status as the giant of haute cuisine owed as much to his showmanship and business sense as it did to his culinary genius.

“His cuisine was built around the classic French repertoire,” said Simon. “But people came for the emotion, for his banter, his sense of humour.”

“I work as if I will live till I’m 100 and I savour each day as if it was my last,” Bocuse once declared as he proudly displayed the French cock American GIs tattooed on his shoulder when he fought alongside them during World War II.

“He wasn’t a pain in the arse — unlike some who reckon they are great chefs,” Simon said. “And he always played the part, greeting people with a smile.

Even though he paved the way for today’s celebrity chefs, he poked fun at their newfound status, joking in 2007 that “maybe it’s time they went back into the kitchens. They’ve had enough air.”

In 1965, Bocuse left his own stove for Japan, the first of many trips to promote French culinary know-how around the world.

From his travels he picked up a flair for marketing, going on to launch an international range of Bocuse branded products and a successful chain of open-plan brasseries, setting up catering schools and competitions.

He also gave his name to the world’s top international cookery competition, the annual “Bocuse d’Or”.

In 2007, more than 80 top chefs flew to France from around the world to celebrate his 81st birthday and his legacy. – Rappler.com