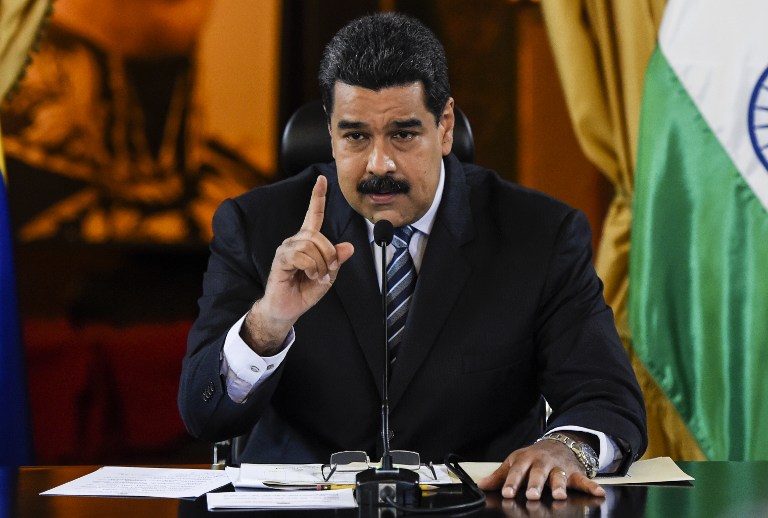 CARACAS, Venezuela – Venezuela will hold presidential elections by the end of April, the ruling Constituent Assembly said Tuesday, January 23, pulling forward a vote in which President Nicolas Maduro hopes to triumph over a divided opposition and win a second term.

The 55-year-old Maduro, a towering mustachioed former bus driver who was Hugo Chavez’s handpicked successor, said he is ready to run if he receives the party’s nomination.

“I am a humber worker, a humble man of the people,” he told reporters before taking the stage at a rally in Caracas.

“If the United Socialist Party of Venezuela… believes that I should be the presidential candidate… I’m at your service.”

It is the closest that Maduro – who assumed power in April 2013 after Chavez died in office from cancer – has come to declaring his candidacy outright.

He has yet to formally be nominated by his party, but it seems a foregone conclusion.

Top party official Diosdado Cabello confirmed to the Assembly that Maduro would be the party’s sole candidate.

“We are not going to have a problem. We have only one candidate to continue with the revolution,” he said, as delegates chanted “Nicolas, Nicolas.”

The polls had been scheduled to be held by the end of the year, but analysts had predicted Maduro would seek an early election to seize the advantage over his opponents as they reel from a string of recent defeats.

“It’s completely logical for the government to advance the election, first because it faces a very complicated year economically, and second it’s trying to catch the opposition at a time of much disruption,” said analyst Benigno Alarcon.

Maduro’s unpopularity rating has risen to 70% as his oil-rich country slipped inexorably into a severe economic crisis compounded by corruption and the fall in the price of crude.

An divided opposition, drawn into a coalition called the Democratic Union Roundtable (MUD), however has been unable to capitalize.

Instead, it has slipped to a series of defeats in regional and municipal elections it has blamed on massive government fraud, but which have seen the Socialists consolidate their hold on power.

“Today, tomorrow, in the past, the only great truth is that this government and its leadership is abhorred by the vast majority of Venezuelans,” former presidential candidate Henrique Capriles wrote on Twitter.

Cabello said the National Electoral Council (CNE) – accused by the opposition of serving the government – would set an exact date for the elections, which he said would be “before April 30.”

Cabello said the decision to bring forward the elections was a response to the United States and the European Union for imposing sanctions on Venezuela, which he said had the sole objective of “seeking a change of government.”

“If the world wants to apply sanctions, we will apply elections,” Cabello told the Assembly, created last year to usurp the power of the opposition-dominated legislature.

“Imperial powers have unleashed a systematic and hateful campaign against Venezuela,” he said.

Last week, the EU blacklisted seven senior Venezuelan officials over human rights violations, including the interior minister, the intelligence chief, the attorney general, the head of the CNE and Cabello himself.

The US also announced a series of sanctions against Venezuela as Maduro has consolidated power amid a crackdown on opponents. – Rappler.com