Jan 28, 2018 5:33 PM PHT
Agence France-Presse
Facebook Twitter Copy URL
Copied
(UPDATED) More favorable weather is expected for the week ahead, and the Vigicrues flood agency lowers its warning level from orange to yellow in several areas upstream of the capital 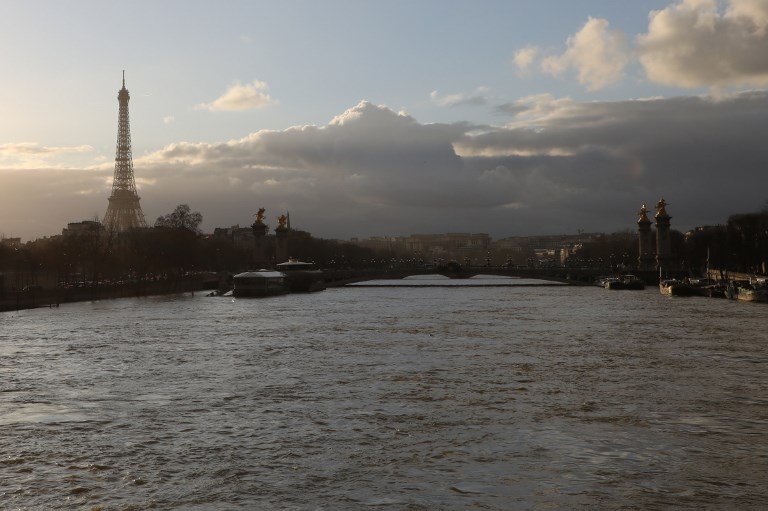 The river had risen another 3.5 inches in 24 hours by Sunday morning, more than four metres above its normal level, causing headaches for commuters as well as people living near its overflowing banks.

Tourists suffered too with the capital’s famous Bateaux Mouches rivercraft out of service, and only emergency services authorised to navigate the waterway.

The Vigicrues flooding watchdog expects the river to peak at 19.3 feet overnight, not quite reaching the 2016 high of 20.01 feet, when priceless artworks had to be evacuated from the Louvre.

But the world’s most visited museum was still on alert Sunday, along with the Musee d’Orsay and Orangerie galleries, with the lower level of the Louvre’s Islamic arts wing closed to visitors at least until Monday.

A statue of an Algerian French army soldier from the Crimean War named Zouave that has guarded the river at the Pont d’Alma bridge in central Paris since 1910 was drenched up to the thighs in the muddy waters of the Seine.

“Fluctuat nec mergitur (tossed but not sunk) but it’s cooold,” the Zouave tweeted from an account set up in its name by an anonymous admirer, using the Latin motto of the City of Paris.

Police again warned flooding aficionados against bathing or canoeing in the river, saying it was “forbidden and extremely dangerous”.

More favourable weather is expected for the week ahead, and Vigicrues has lowered its warning level from orange to yellow in several areas upstream of the capital.

But even once the water levels start to recede, forecasters and officials say it will be a slow process, since much of the ground in northern France is already waterlogged.

“If we’re talking about things getting completely back to normal, that’s going to take weeks,” said Jerome Goellner, regional head of environmental services.

Around 1,500 people have been evacuated from their homes in the greater Paris region, according to police, while a similar number of homes are without electricity.

Some basements in Paris began to suffer leaks on Friday, and a health centre in the city’s northwestern suburbs, where 86 patients were receiving care, was evacuated because of flooding.

The December-January period is now the third wettest on record since data collection began in 1900, according to France’s meteorological service.

A main commuter line, the RER C, has halted service at Paris stops indefinitely, and some expressways that run alongside the Seine have been closed.

However, fears of flooding like that of 1910, which saw the Seine rise to 8.62 metres, shutting down much of Paris’s basic infrastructure, appeared unfounded.

In the city centre, the Seine flows through a deep channel, limiting the potential flooding damage.

But several areas on the city’s outskirts are under water, such as the southern suburb of Villeneuve-Saint-Georges, where some residents were getting around by boat and dozens have been evacuated from their homes. – Rappler.com