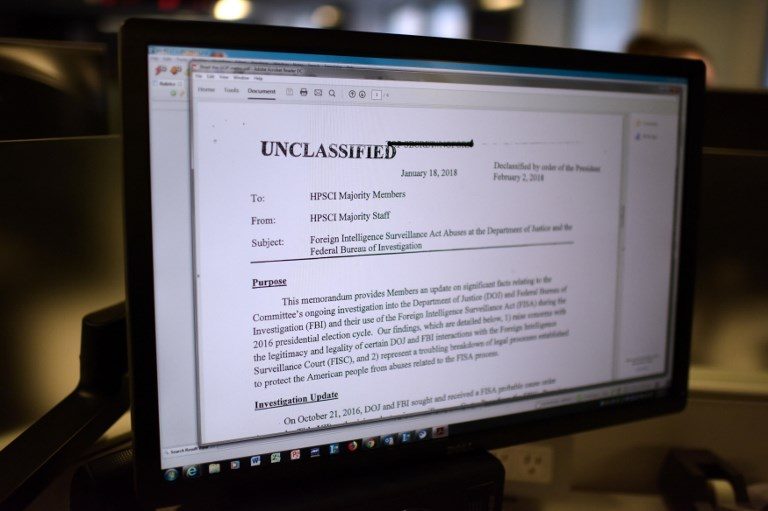 WASHINGTON DC, USA – Democrats on Sunday, February 4, cautioned President Donald Trump that firing top law enforcement officials over the investigation into his campaign’s links to Russia could spark a dangerous “confrontation,” as Republican lawmakers broke ranks to say the probe should go on unhindered.

Democrats stoutly resisted the memo’s release, saying it was “deliberately misleading” and possibly intended to lay the groundwork for Trump to fire senior officials and subvert the Russia election meddling investigation led by Robert Mueller.

In a sign of an emerging split in the president’s party, 4 Republican members of the intelligence committee – Representatives Trey Gowdy, Chris Stewart, Will Hurd and Brad Wenstrup – said Sunday that the memo should not be allowed to undermine Mueller’s investigation.

Dick Durbin, the number two Senate Democrat, warned on Sunday that any move by Trump against senior law enforcement officials involved in the inquiry could have grave consequences.

“The question at that moment is whether or not the majority Republicans in the House and the Senate will stand up for the rule of law and the Constitution if the president takes that extreme position,” Durbin said on CNN’s “State of the Union.”

“If the president takes this extreme action, I’m afraid that it could lead to a confrontation we do not need in America.”

Durbin contested the suggestion that the FBI’s application to a special court for authority to surveil Page failed to note that the request was based partly on a dossier funded by Democrats.

The senior Democrat on the intelligence committee, Representative Adam Schiff, insisted Sunday that “the court was notified there was a political actor involved.”

Schiff has said he wants a committee vote soon to release his own secret memo responding to the Republicans’ document.

Trump tweeted Saturday that the memo “vindicated” his insistence that there was “no collusion and there was no obstruction.” He said leaders of the FBI and Justice Department had acted in a “disgraceful” fashion.

But 4 Republicans on the committee took pains on Sunday to show support for Mueller, deputy attorney general Rod Rosenstein and FBI chief Christopher Wray at a time the FBI and Justice Department are facing almost unprecedented criticism from a US president.

“I’ve had my differences with Rod Rosenstein, and I still think that he is fully capable of helping run a Justice Department that we can all have confidence in,” said Gowdy, who also chairs the House Oversight Committee, on CBS’s “Face the Nation.”

Stewart told “Fox News Sunday,” “I think it would be a mistake for anyone to suggest the special counsel should not continue his work.”

Hurd, in turn, told ABC: “I want to stress Bob Mueller should be allowed to turn over every rock, pursue every lead so we can have trust knowing what Russia did or didn’t do.”

Former CIA director Leon Panetta also defended the work of US law enforcement and intelligence agencies, telling Fox that “when intelligence starts to be used on a partisan basis to score political points, I think that really undermines the way the intelligence committee is supposed to function.”

Panetta, a Democrat who also served as defense secretary under President Barack Obama, said it would be “a big mistake” if Trump moved to fire Rosenstein or Mueller.