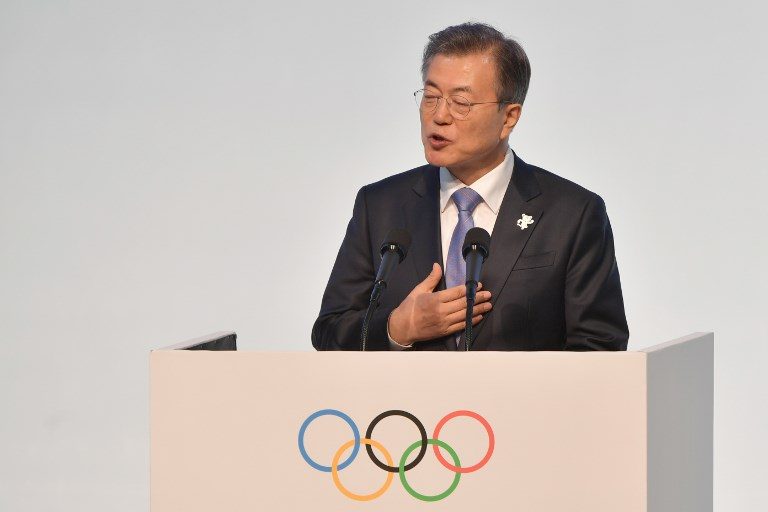 Facebook Twitter Copy URL
Copied
Kim Yong Nam, who is officially leading Pyongyang's diplomatic delegation to the Games, meets Moon Jae-in at a leaders' reception ahead of the opening ceremony in Pyeongchang

Kim Yong Nam, who is officially leading Pyongyang’s diplomatic delegation to the Games, met Moon at a leaders’ reception ahead of the opening ceremony in Pyeongchang.

Moon and his wife received their guests one by one and the two men smiled as they shook hands in a relaxed manner.

There was no sign of Kim Yo Jong, the influential sister of the North’s leader Kim Jong Un, who is part of Pyongyang’s delegation.

Kim Yong Nam is the highest-level Northern official ever to visit the South, and was meeting his third South Korean president after participating in North-South summits in Pyongyang in 2000 and 2007.

Moon and his wife Kim Jung-sook both wore lapel badges of Soohorang, the dancing white tiger mascot of the Winter Games.

A seating plan for the dinner shown on South Korean television showed Kim Yong Nam seated at the top table, in between Olympics chief Thomas Bach and UN Secretary General Antonio Guterres, and directly opposite US Vice President Mike Pence.

Japanese Prime Minister Shinzo Abe was also among the group.

Washington and its ally Tokyo are regularly threatened by nuclear-armed Pyongyang. – Rappler.com