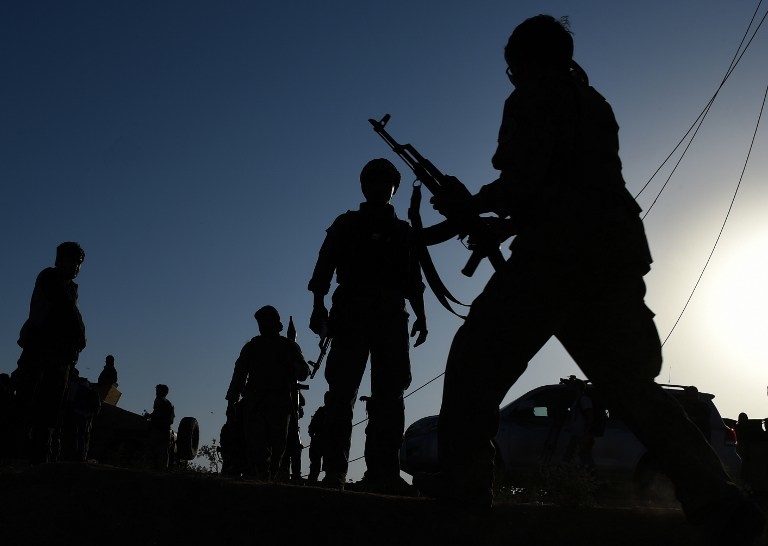 Facebook Twitter Copy URL
Copied
US aircraft dropped 4,361 munitions across Afghanistan in 2017 alone. They are deploying more troops and aircrafts to battle Islamist militants this year.

KABUL, Afghanistan – Fighting in Afghanistan has escalated with United States and Afghan officials tipping 2018 to be a “game-changer” as relentless airstrikes pummel Islamist militant groups — but others warn the 16-year war has simply become a more violent stalemate.

A traditional easing in fighting during the freezing winter months has been absent this year as the Taliban and Islamic State (ISIS) group respond to intensifying US and Afghan air assaults.

Since US President Donald Trump announced his new strategy for Afghanistan in August, giving the US Air Force more leeway to go after militants, American pilots have been bombarding Taliban and ISIS fighters, their training camps and drug-making laboratories.

The new policy has “definitely been a game-changer and the Taliban is definitely feeling it”, he added.

The US is deploying more troops and aircraft to Afghanistan, which has become the main theater of operations for the US Air Force following a drawdown in Syria and Iraq. At the same time, it is beefing up Afghanistan’s fledgling air capabilities.

With the help of huge B-52 bombers, the US has expanded its campaign to far northeastern Afghanistan near the China and Tajikistan borders where it is also targeting the East Turkestan Islamic Movement, which neighboring China blames for launching attacks on its soil.

“The days of old where you had fighting seasons are gone,” Major General James Hecker, head of NATO’s Air Command in Afghanistan, told Agence France-Presse in Kabul last week.

‘Point of no return’

Militants have reacted violently to the increased airstrikes, launching a wave of deadly attacks across the war-torn country, including in Kabul, in a devastating display of defiance.

Combined with increased activity by relative newcomers IS, which has been expanding beyond its eastern stronghold, the country appeared to be “at a flashpoint almost to the point of no return”, TRAC warned in a new report.

The escalation of the conflict foreshadows a “particularly bloody year”, Michael Kugelman of the Wilson Center in Washington, DC told AFP, forecasting more Afghan and US casualties.

But in recent years Taliban militants have continued to carry out attacks throughout the colder months.

This winter has been worse than ever, Borhan Osman, a senior analyst with the International Crisis Group, said in a report.

“Afghanistan is suffering more intense violence now than during any other winter… since 2001,” Osman said, highlighting last month’s attacks in the Afghan capital that killed more than 130 people in less than 10 days.

Among the worst of the attacks was an assault on Kabul’s luxury Intercontinental Hotel on January 20, a terrifying hours-long ordeal which saw Taliban insurgents armed with Kalashnikovs and suicide vests charge from room to room searching for foreigners.

That was followed a week later by a devastating bombing involving an explosives-packed ambulance in a crowded street that killed more than 100 people, mostly civilians, and also claimed by the Taliban.

“This looks like a mutually escalating stalemate” as both sides adapt to the new tactics of the other, Afghanistan Analysts Network senior analyst Kate Clark told AFP.

The fighting this winter has been fuelled by more Taliban fighters remaining on the frozen battlefield instead of regrouping in Pakistan, which has long been accused of providing safe havens to the militants — charges Islamabad denies.

Former general and military analyst Attiqullah Amarkhil told AFP that Taliban fighters had been ordered to “move forward instead of going back and forth” across the border.

“I have not been to Pakistan for a year and I will not go there,” Mawlawi Ahmad, a Taliban commander in the restive southern province of Helmand, told AFP.

The escalation in fighting has all but dashed hopes for peace negotiations with the Taliban anytime soon.

Trump ruled out talks last month after the spate of attacks, an apparent reversal of the position set out in his Afghanistan strategy.

But Washington is still hoping to bring the Taliban to the negotiating table, Deputy Secretary of State John Sullivan said last week following a trip to Kabul.

Sullivan’s comments come as the Afghan capital gears up for the Kabul Process meeting at the end of February, where the central government is under pressure to present a framework for peace talks.

“There’s no way Kabul, or Washington for that matter, would agree to extend an olive branch to an outfit that is placing explosives in ambulances,” Kugelman said. – Rappler.com