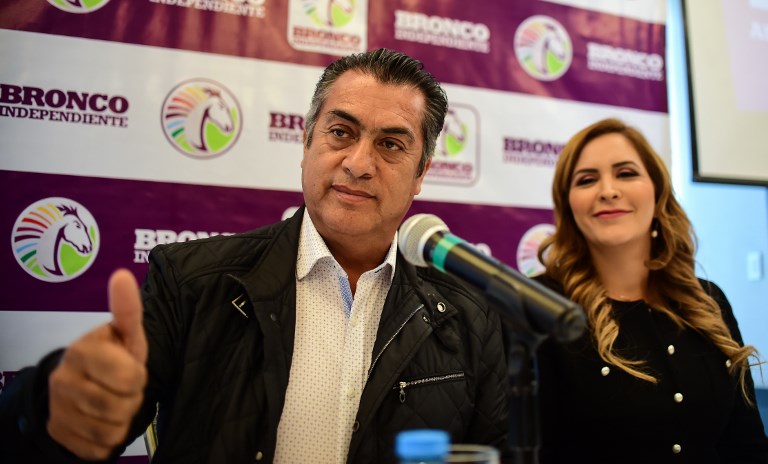 MEXICO CITY, Mexico – A former first lady, a horse-riding governor known as “The Bronco” and a senator who calls himself “The Jaguar” jumped into Mexico’s presidential race Monday, February 19, after gathering the required signatures to run as independents.

The July 1 election will be the first time Mexico has allowed independent presidential candidates in its modern history.

And while pundits say they have next to no chance of winning, they may just shake things up at a time when Mexicans are fed up with traditional parties over their seemingly endless corruption scandals and their failure to rein in shocking levels of violent crime.

Dozens of Mexicans sought to stand as independents, but only 3 managed to gather the more than 860,000 signatures needed by Monday’s deadline, according to the National Electoral Institute.

Margarita Zavala, Jaime “The Bronco” Rodriguez Calderon and Armando “The Jaguar” Rios Piter are now in the running.

Zavala is the wife of ex-president Felipe Calderon, who led the country from 2006 to 2012.

She is the best positioned of the independents, running in fourth place with some 5% support, according to recent polls.

A former member of her husband’s party, the conservative National Action Party (PAN), she quit last year after accusing its then leader Ricardo Anaya of strong-arming his way to the party’s presidential nomination.

She now threatens to strip away crucial votes from Anaya, who is in second place behind fiery leftist Andres Manuel Lopez Obrador, or AMLO.

Recent polls give Lopez Obrador just over 30% of the vote, with Anaya in the 20s and the third-place candidate – Jose Antonio Meade, a former finance minister running for the governing Institutional Revolutionary Party (PRI) – in the teens.

Given Mexico’s first-past-the-post electoral system, Zavala could play spoiler if she draws enough of the conservative vote away from Anaya.

So far, she has had limited impact on the race.

But that may be because the former first lady has been so busy gathering the required signatures that she has done little actual campaigning.

She hinted that was about to change.

“Now I’m on the ballot,” she told Radio Formula. “I’ve got more than a million signatures in 20 states.”

Next in the independent pack is Rodriguez Calderon, “The Bronco,” the governor of the northern state of Nuevo Leon.

A tough-talking former rancher who doesn’t shy away from controversy or cussing, he already made history by becoming the first independent candidate to be elected governor, in 2015.

Now he has taken leave from that job to run for president, saying his own rise from poverty and first-hand experience of crime – his son was murdered and his daughter kidnapped – make him the person to whip Mexico into shape.

“Of all the candidates, I’m the only one who knows the problems in the flesh: poverty, lack of opportunities, violence, evil,” he told a press conference Monday.

But the cowboy-hat-wearing governor also has a penchant for landing in hot water, such as when he warned school children about the dangers of teen pregnancy by saying, “No one loves a fat girl.”

His presidential bid may already be in trouble: he stands accused of using fake signatures to register as an independent – which he denies.

Last in the field is senator Rios Piter, who calls himself “The Jaguar” and has launched a political movement of the same name.

The moderate leftist is seeking to steal votes away from Lopez Obrador.

Another popular would-be independent candidate was Maria “Marichuy” de Jesus Patricio, a Nahuatl traditional healer who was seeking to become the first indigenous woman to run for president of Mexico. But she only managed to gather 230,000 signatures.

It is unclear how much difference any of the independents can make.

“It is highly unlikely that independent candidates will be competitive,” the Eurasia Group consultancy said in a note.

“That said… they will probably take some votes away from established candidates. This will matter if the race ends up being close.” – Rappler.com