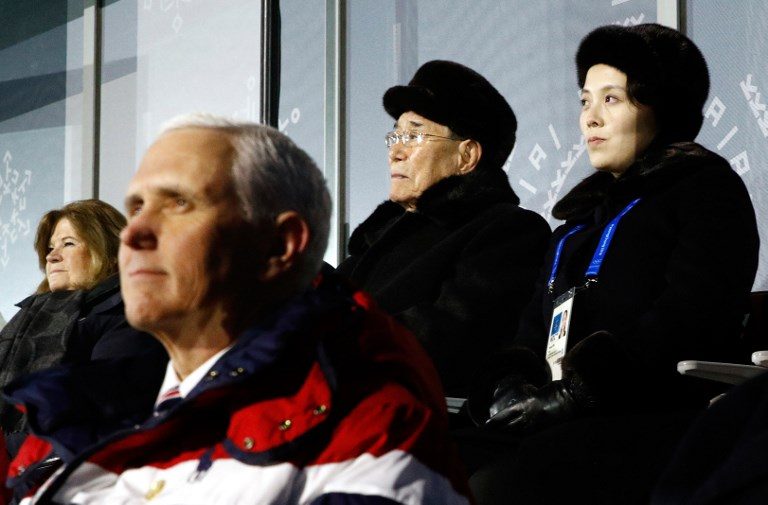 Facebook Twitter Copy URL
Copied
(UPDATED) Pyongyang scrapped the planned talks during the 2018 Winter Olympics after the US vice president denounced abuses from the 'murderous regime,' US officials say

WASHINGTON DC, USA (UPDATED) – Mike Pence and North Korean officials had planned to meet secretly during the 2018 Winter Olympic Games, but Pyongyang scrapped the talks after the US vice president denounced abuses from the “murderous regime,” US officials said Tuesday, February 20.

Pence did not interact with the North Koreans even though he was seated in the same box as them at the opening ceremony of the Games on February 9 – nor did he shake hands with the North’s ceremonial head of state Kim Yong Nam during an earlier leaders’ reception.

The North Koreans, who had sent Kim Yong Nam and leader Kim Jong Un’s sister Kim Yo Jong to the Games, backed out of the planned meeting after Pence announced Washington would soon unveil its “toughest and most aggressive sanctions” against Pyongyang.

During his Asian tour, he also denounced the North’s nuclear drive and sought to shore up ties with regional allies – and longtime North Korean foes – Japan and South Korea.

Pence, who led the American delegation to the Games, said at the time he traveled with the father of late former prisoner Otto Warmbier to the South to “remind the world of the atrocities happening in North Korea.”

“North Korea would have strongly preferred the vice president not use the world stage to call attention to those absolute facts or to display our strong alliance with those committed to the maximum pressure campaign,” Pence’s spokesman Ayers said.

State Department spokeswoman Heather Nauert said only a “brief meeting” with leaders of the North Korean delegation had been on the table.

“The vice president was ready to take this opportunity to drive home the necessity of North Korea abandoning its illicit ballistic missile and nuclear programs,” Nauert said in a statement.

“At the last minute, DPRK officials decided not to go forward with the meeting. We regret their failure to seize this opportunity.”

Ayers characterized the offer as the North having “dangled a meeting in hopes of the vice president softening his message, which would have ceded the world stage for their propaganda during the Olympics.”

“As we’ve said from day one about the trip: this administration will stand in the way of Kim’s desire to whitewash their murderous regime with nice photo ops at the Olympics,” Ayers said.

“Perhaps that’s why they walked away from a meeting or perhaps they were never sincere about sitting down.”

Analysts say the North’s Olympic diplomatic drive sought to loosen international sanctions against it and undermine the alliance between Seoul and Washington.

Even as the US warned against falling for Pyongyang’s Olympic charm offensive, North Korean leader Kim Jong Un issued an invitation via his sister Kim Yo Jong, who was attending the Games, for a summit with South Korean President Moon Jae-in.

But on his return trip from the Games, Pence said there was “no daylight” between the US, South Korea and Japan on efforts to isolate Pyongyang economically and diplomatically until it abandons its nuclear and ballistic missile program.

Washington calls it a campaign of “maximum pressure.”

Mintaro Oba, a former State Department diplomat specializing in the Koreas, tweeted that “it’s entirely possible that North Korea scheduled the reported secret meeting with VP Pence fully intending to cancel so that they could play the blame game.”

“Sudden cancellations/withdrawals are a well-established part of the North Korean playbook,” added Oba, now a speechwriter in Washington.

Global alarm at the rapid advance of nuclear-armed North Korea’s weapons technology rose further last year when the regime tested its Hwasong-15 ballistic missile – theoretically capable of hitting the mainland US – in a challenge to Washington, which has threatened to “utterly destroy” the regime in the event of an attack.

President Donald Trump and the North’s leader Kim Jong Un have engaged in a series of personal insults.

But as tensions rose between the North and Washington, the Games triggered a rapid reconciliation between the two Koreas, who are still technically at war.

“The president made a decision that if they wanted to talk, we would deliver our uncompromising message. If they asked for a meeting, we would meet,” Ayers said, referring to Trump.

“He also made clear that until they agreed to complete denuclearization we weren’t going to change any of our positions or negotiate.”

Woodrow Wilson Center vice president Aaron David Miller, a former advisor to Republican and Democratic diplomatic chiefs, highlighted the Trump administration’s conflicting messages on whether to talk or not with the North Koreans.

“Has the locked and loaded fire and fury Trump Administration come to conclusion that it’s time to stop talking about North Korea and to start talking to them?” he asked. – Rappler.com