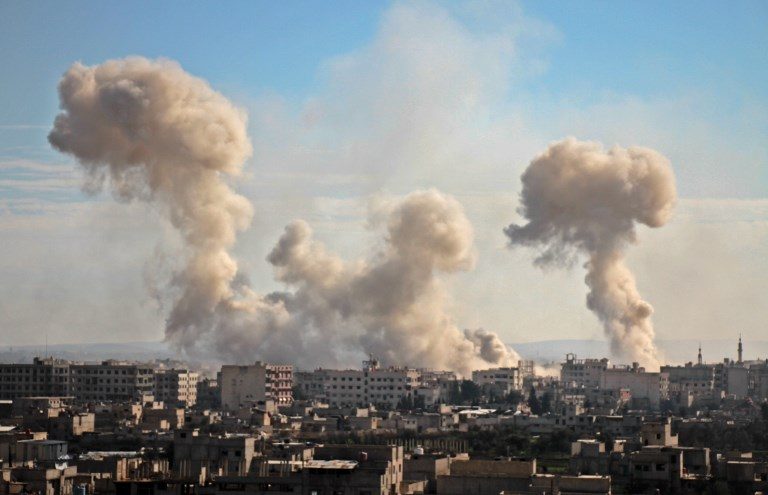 Facebook Twitter Copy URL
Copied
At least 250 civilians have been killed since the escalation began on Sunday, February 18, among them dozens of children, the Syrian Observatory for Human Rights says

ARBIN, Syria – Syrian and Russian air strikes on the rebel-held Eastern Ghouta enclave have killed more than 100 civilians for the second straight day and put another hospital out of service.

In a major development in Syria’s complex 7-year war, Damascus also sent pro-regime fighters to the northern Afrin region, where they came under fire by Turkish forces attacking the Kurdish-controlled enclave.

On the outskirts of Damascus, air strikes, rockets and artillery fire have been battering the Eastern Ghouta enclave in apparent preparation for a government ground assault.

At least 250 civilians have been killed since the escalation began on Sunday, February 18, among them dozens of children, the Syrian Observatory for Human Rights said.

It was the second straight day that the civilian death toll topped 100, after 127 were killed Monday, February 19, in Eastern Ghouta’s bloodiest day in four years.

The strikes left an important hospital out of action, further limiting the little medical aid that besieged civilians can access.

“The Arbin hospital was hit twice today and is now out of service,” said Mousa Naffa, country director in Jordan for the Syrian American Medical Society (SAMS), which supported the clinic.

The rebel-held region is nominally included in a “de-escalation” deal meant to tamp down violence, but President Bashar al-Assad appears to be preparing troops for a ground assault to retake it.

US State Department spokeswoman Heather Nauert criticized the “siege and starve tactics” of the Assad regime and said: “The cessation of violence must begin now.”

Eastern Ghouta is home to more than 400,000 people living under crippling government siege, with little access to food or medical resources.

The United Nations said 6 hospitals had been hit in the region in the past 48 hours, in addition to the one in Arbin.

At least 3 were out of service and two were only partially functioning, said the UN’s regional humanitarian coordinator for Syria, Panos Moumtzis.

“It’s beyond imagination what is happening in East Ghouta today,” he said.

“The untold suffering is intolerable and residents have no idea whether they will live or die. This nightmare in East Ghouta must end and must end now.”

Hours before the Arbin hospital was bombed, a doctor there spoke of the casualties they had been treating.

“February 19 was… one of the worst days that we’ve ever had in the history of this crisis,” Abu al-Yasar told Agence France-Presse.

He described treating a one-year-old with blue skin and a faint pulse, rescued from under the rubble.

“I opened his mouth to put in a breathing tube and I found it packed with dirt,” said Abu al-Yasar.

He pulled out the dirt as fast as possible, put in the breathing tube and managed to save the baby.

“This is just one story from among hundreds of wounded.”

The bloodshed prompted the UN children’s agency UNICEF to issue a largely blank statement saying “we no longer have the words to describe children’s suffering.”

Syria’s main opposition group condemned the government onslaught as a “bloodbath” and a “war crime”, saying it may pull out of UN-backed peace talks in protest.

On Tuesday, at least 9 people were killed and 49 wounded by rebel fire on the capital, state media reported.

Al-Watan newspaper, which is close to the government, said the bombing campaign “comes ahead of a vast operation on Ghouta, which may start on the ground at any moment.”

The army already waged a ferocious 5-day air assault on Eastern Ghouta earlier this month that left around 250 civilians dead and hundreds wounded.

Syria’s conflict erupted in 2011 with protests against Assad, but the ensuing war has carved the country into various zones of control among rebels, jihadists, the regime, and Kurds.

Turkey has been waging an air and ground offensive against the Kurdish People’s Protection Units (YPG) militia in the Afrin enclave for the past month but on Tuesday the stakes were ratcheted up.

Hundreds of Syrian pro-government forces entered the region for the first time since 2012 to face off against Turkey alongside Kurdish forces that Ankara views as an offshoot of its own internal insurgency.

But they quickly came under shelling by Turkish forces, who said they had fired “warning shots” at the “pro-regime terrorist groups”.

In a statement, YPG spokesman Nuri Mahmud said the Kurdish forces had called on the Damascus government to help fend off Turkey’s assault.

“The Syrian government responded to the invitation, answered the call of duty and sent military units today, February 20, to take up positions on the borders, and participate in defending the territorial unity of Syria and its borders,” the statement said.

The YPG has controlled Afrin since government forces withdrew from Kurdish-majority northern areas in 2012. – Rappler.com