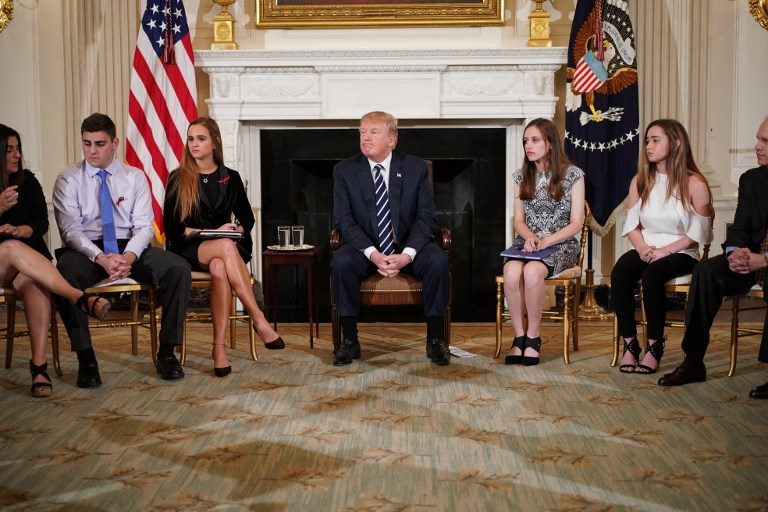 Facebook Twitter Copy URL
Copied
(UPDATED) Trump also promises 'very strong' background checks on gun owners during the poignant "listening session" on Wednesday, February 21, in which he heard first-hand accounts from bereaved parents and friends, and schoolchildren who narrowly escaped with their own lives

WASHINGTON DC, USA (UPDATED) – US President Donald Trump suggested arming teachers to deter mass shootings as he faced broken voices, tears and demands for action at a meeting with survivors of the gun rampage that killed 17 people at a Florida high school.

Trump also promised “very strong” background checks on gun owners during the poignant “listening session” on Wednesday, February 21, in which he heard first-hand accounts from bereaved parents and friends, and schoolchildren who narrowly escaped with their own lives.

As he sat with these people, Trump was photographed holding a piece of paper with notes suggesting questions or other things to say to them.

As seen on the photographs, these included “What would you most want me to know about your experience?” and “I hear you.” Social media lit up with criticism of Trump’s apparent need for help in sounding compassionate to people who are suffering.

Trump’s proposal to arm educators received a cool response, too, from a teacher who survived the shooting as well as the local sheriff at a town hall meeting in Florida.

“A gun-free zone, to a maniac – because they are all cowards – a gun-free zone is ‘Let’s go in and let’s attack,” Trump said.

“If you had a teacher who was adept at firearms, they could very well end the attack very quickly,” Trump said, suggesting that 20 percent of a school’s teachers could be trained to carry concealed weapons.

“This would only be obviously for people who are very adept at handling a gun,” Trump added.

Holding signs reading “Never Again” and “Be The Adults, Do Something,” teenaged survivors of last Wednesday’s shooting rallied outside the Florida state Capitol in Tallahassee.

“No longer can I walk the halls I walked millions of times before without fear and sadness,” Stoneman Douglas student Florence Yared told a crowd that included thousands of supporters.

‘My daughter has no voice’

The White House meeting was attended by Stoneman Douglas students, their parents and also the parents of victims of the Columbine, Sandy Hook and other shootings.

Andrew Pollack, whose 18-year-old daughter Meadow was among the Stoneman Douglas victims, told Trump he was there “because my daughter has no voice. She was murdered last week.”

“We protect airports. We protect concerts, stadiums, embassies,” Pollack said, his voice seething with rage. “I can’t get on a plane with a bottle of water. But we leave some animal to walk into a school.”

Justin Gruber, a 15-year-old Stoneman Douglas student, said “there needs to be significant change in this country because this has to never happen again.

“People should be able to feel that when they go to school they can be safe,” Gruber said.

Samuel Zeif, who lost a close friend at Stoneman Douglas last Wednesday, said it was important to “be strong for the fallen who don’t have a voice to speak anymore.”

“Let’s never let this happen again. Please,” he told the president, later adding: “I don’t understand why I can still go in a store and buy a weapon of war.”

But students have vowed to make the Parkland tragedy a turning point, with youths inspired on social media by the activism of their peers staging walkouts from high schools in Florida and elsewhere on Wednesday and demonstrating in cities including Minneapolis, Chicago and Washington.

Students are planning a march on Washington on March 24, with sister rallies planned across the country.

And students and teachers who survived the shooting challenged politicians over their positions on gun control at a town hall meeting in Florida.

Rubio demured on the funding, but did say he would reconsider his position on large-capacity magazine restrictions, as “it may save lives in an attack.”

NRA spokeswoman Dana Loesch, who repeatedly came under fire at the forum, was asked if it should be harder to obtain semi-automatic weapons, but sought to shift the conversation from firearms to mental health issues.

“I don’t believe that this insane monster should have ever been able to obtain a firearm,” she said of the shooter.

Trump – who received strong backing from the NRA during his White House run – has shown a new-found willingness to take at least some steps on gun control following the Parkland shooting.

But his suggestion of arming teachers drew scorn at the town hall meeting.

Scott Israel, the local sheriff, announced that “deputies who are qualified and trained will be carrying rifles on school grounds,” but also pushed back against arming teachers.

“Am I supposed to get extra training now to serve and protect on top of educate these children,” asked Ashley Kurth, a teacher who sheltered students during the shooting.