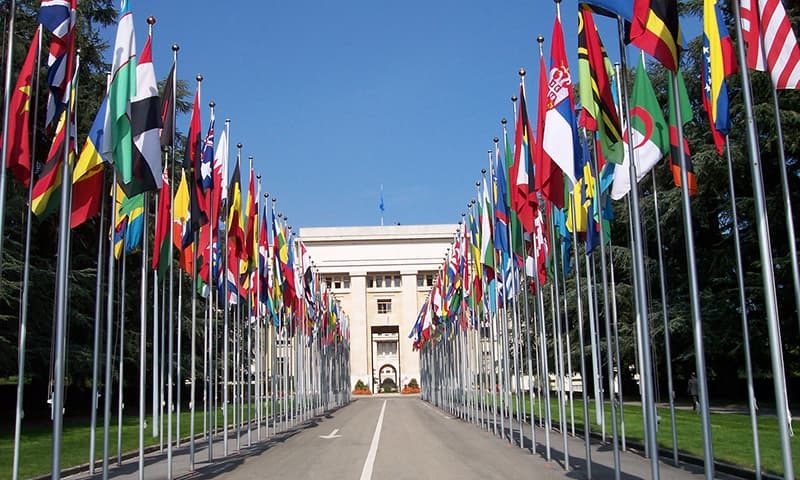 Facebook Twitter Copy URL
Copied
(UPDATED) It is still unclear how many of the 9,500 United Nations staff in Geneva are joining the strike on Tuesday, February 27

GENEVA, Switzerland (UPDATED) – Angered by “unfair” pay cuts, UN staff in Geneva are planning a half-day strike next week, as dozens of ministers and other dignitaries attend high-level events at the organization’s European headquarters.

“We have tried other forms of protest before, to no avail… They have left us no choice,” Ian Richards, who heads the UN staff unions association in Geneva, told Agence France-Presse on Sunday, February 25.

He said it remained unclear how many of some 9,500 UN staff members in Geneva would participate in the work stoppage on Tuesday, February 27, or what impact it would have, pointing out that “this is not like a bus company where the buses just stop.”

“But we certainly expect this to have an impact,” Richards said.

The half-day work stoppage will come during what is arguably one of the busiest weeks of the year at the UN in Geneva, with around 100 heads of state, government ministers, and country representatives from around the world set to attend the main annual sessions of the UN’s top human rights and disarmament bodies.

Speaking on behalf of the UN in Geneva, spokeswoman Alessandra Vellucci told Agence France-Presse in an email that staff should be “reminded that actions which disrupt or interfere with official activity of the Organization may be considered contravening staff obligations.”

She stressed though that “UN Geneva recognizes and respects the right of staff to freedom of association and acknowledges the dissatisfaction of staff” linked to pay cuts.

She said “contingency plans” had been put in place to “minimize the consequences of the possible work stoppage in a period of intense diplomatic activity” at the UN in Geneva.

According to a letter sent to all UN agency chiefs late last week, Tuesday will mark only “a first day of action, [and will] be followed by others.”

The letter, sent by the unions and representatives of civil servants working for the UN, went out as staff received their first pay slips showing a 3.5% salary cut, and with the knowledge that the cut will swell to 5% by June, Richards said.

The signatories said staff had “lost confidence” in the International Civil Service Commission (ICSC) – a body appointed by the UN General Assembly to govern UN employees which has ordered deep cuts to pay and benefits for many staff around the globe.

There has been a “substantial deterioration in the employment conditions of UN staff around the world, caused by ICSC’s findings, recommendations and decisions,” the letter complained, accusing the body of pursuing an “austerity agenda driven by certain member states.”

Although the letter did not mention the member states by name, the United States, which has long been the top UN contributor, is clearly among them.

UN employees are by contract the highest paid civil servants in the world, with their tax-free salaries often complemented by multiple benefits including subsidies for rent, healthcare, and educational grants for their children.

Richards said some review and reform of the UN payment system was not unreasonable, but insisted that “it has to be done in a transparent, balanced, and fair way.”

For Geneva, ICSC initially said last year a 7.5% pay cut was warranted after determining that the cost of living adjustment given to staffers in the pricy Swiss city was excessive.

The unions, which mounted protests over what they termed “significant errors and methodological flaws” in the body’s calculations, said they eventually received assurances the cuts would be only 2-3%,

“Now finally it is 5%, so the ICSC has gone back on its word,” Richards said.

He stressed that Geneva staff were not the only ones feeling the squeeze.

Staff in Bangkok have for instance been informed of a 10% cut, while staff in Tokyo are looking at 25%, without sufficient justification, he said.

The letter also noted the many unanswered questions “surrounding the application of the methodology for the local salary surveys in Bangkok, New York, Tokyo, and New Delhi among others, leading to unjustified, unfair, and hard to manage… salary scales.”

“The reputation of the UN as a leading employer that treats its staff with respect and fairness has been tarnished,” it warned. – Rappler.com