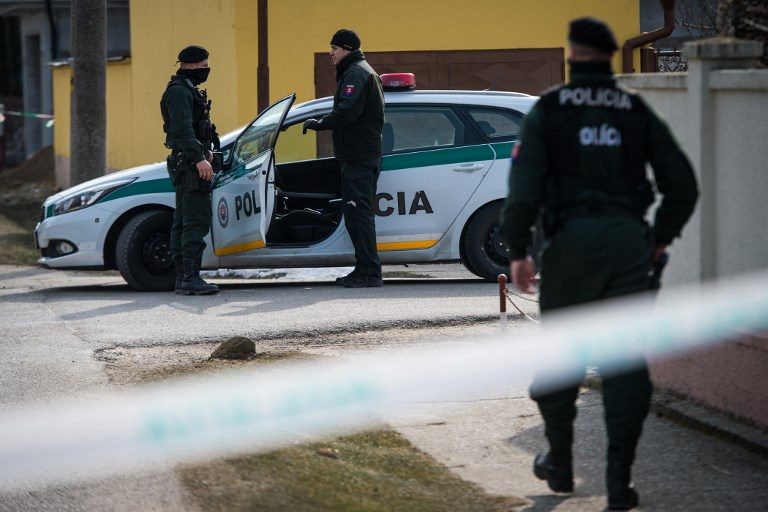 Facebook Twitter Copy URL
Copied
'If the death of investigative reporter Jan Kuciak proves to be linked to his journalism, it would be an unprecedented attack on freedom of the press and democracy in Slovakia,' leftist Prime Minister Robert Fico says

BRATISLAVA, Slovakia – Slovakian police launched a murder probe on Monday after a leading investigative journalist known for writing about high-profile tax fraud was found dead along with his girlfriend, officials said.

The body of Jan Kuciak, a 27-year-old reporter for the aktuality.sk news portal, was discovered alongside that of Martina Kusnirova at their home in Velka Maca, some 65 kilometers (40 miles) from the Slovak capital Bratislava.

Police commander Tibor Gaspar told reporters Kuciak died of a gunshot wound to the chest while his partner was shot in the head.

He said the motive was “most likely related to the investigative work of the journalist.”

“If the death of investigative reporter Jan Kuciak proves to be linked to his journalism, it would be an unprecedented attack on freedom of the press and democracy in Slovakia,” leftist Prime Minister Robert Fico said in a statement.

Police believe the double homicide occurred between Thursday and Sunday. Family members contacted the police after being unable to reach the pair.

“The EU cannot accept that a journalist is killed for doing his job. I call on the Slovak authorities to launch a thorough investigation with international support if needed for Jan Kuciak,” he wrote on Twitter.

Reporters Without Borders (RSF) also condemned the attack, saying Kuciak and his family had recently been threatened, and noting that he was the fifth journalist to be killed in the EU over the past decade.

“We demand an investigation to shed light on the exact circumstances of this case, especially since Jan Kuciak and his relatives received threats in recent months,” said a statement from Pauline Ades-Mevel who heads RSF’s EU-Balkans office.

Slovakia is ranked 17th in the 2017 RSF World Ranking for press freedom, dropping five places compared to the previous year.

The last story he wrote was about businessman Marian Kocner, known for real estate deals.

Known for insulting and threatening journalists, Kocner said last year that he would set up a website publishing information on the private lives of journalists, according to the leading SME daily.

And he allegedly threatened to expose “any dirt” he could find on Kuciak or his family, according to Kuciak’s editor-in-chief Peter Bardy, writing in September 2017. – Rappler.com