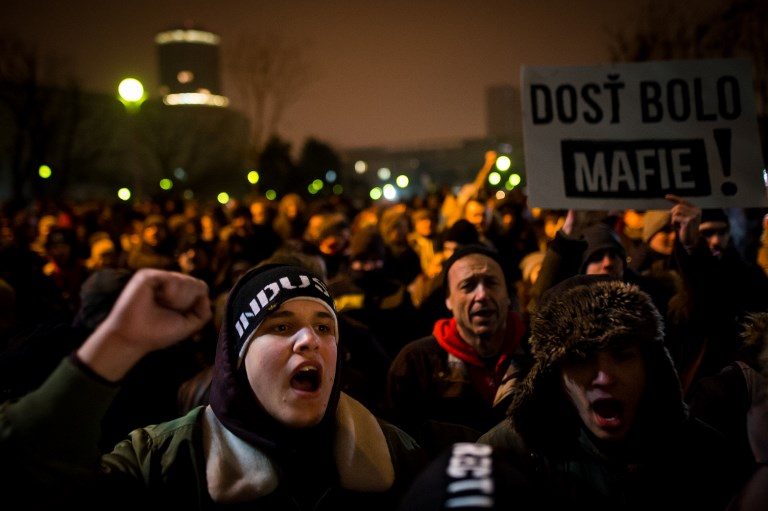 BRATISLAVA, Slovakia – Thousands flocked to candlelit anti-corruption protests and memorials held across Slovakia on Friday, March 1 for murdered journalist Jan Kuciak, killed as he was about to publish an explosive report on alleged high-level political corruption linked to the Italian mafia.

Organizers estimated that around 25,000 people gathered in the capital Bratislava, while thousands showed in a dozen other cities and towns across the EU country of 5.4 million people.

Many held candles, marching in silence in sub-zero weather.

“I’m standing here with you today to pay tribute to two young people, Jan and Martina,” Slovak President Andrej Kiska said, addressing the crowd in central Bratislava before holding a minute of silence for Kuciak and his fiancee Martina Kusnirova who was also gunned down.

Police found the two 27-year-olds shot dead at their home near the capital Bratislava on Sunday.

Kuciak was about to publish an article that raised possible political links between Italian businessmen operating in Slovakia and Calabria’s notorious ‘Ndrangheta mafia.

“We live in a mafia state,” student Jan Kubis told Agence France-Presse (AFP). “They were not much older than I am. Something must change in Slovakia.”

Slovak police on Thursday, March 1 detained several Italian businessmen named by Kuciak in his explosive report, which was published posthumously earlier this week, as investigators said his death was “most likely” linked to his reporting.

“On Monday morning, my colleagues had tears, anger and fear in their eyes, and journalists were happy to show their determination to work further,” Lukas Fila, director of N Press publishers, told protesters.

“We have to show that the public will insist on investigating this tragedy.”

Christophe Deloire, Reporters Without Borders (RSF) secretary-general said that “tonight Bratislava is the world capital of press freedom,” after having held talks with Slovak Prime Minister Robert Fico earlier in the day.

Deloire told AFP he had asked Fico, a leftist who does not shy away from using populist rhetoric, to “clearly express his regrets” for having publicly insulted journalists, something the RSF chief called “dangerous”.

Fico’s office later issued a statement saying that there was “no call on the PM to apologize to journalists”, denying Deloire’s claim.

Contacted by AFP, Harlem Desir, the Freedom of the Media representative at the Organization for Security and Co-operation in Europe, said he “can confirm” that Deloire had called on Fico to apologize to journalists.

Desir, who met Fico along side Deloire earlier Friday in Bratislava, also insisted that the “masterminds behind this crime” must be brought to justice.

Fico once told journalists they were “dirty, anti-Slovak whores” and used terms like “silly hyenas” and “slimy snakes” to describe the media.

But in the wake of Kuciak’s killing, he has vowed his government would “protect freedom of speech and the safety of journalists”.

Protesters touted placards saying “journalists, don’t be afraid, we are on your side!” while other held pictures with Fico’s face crossed out.

Fico has accused the opposition of using the murder as a “political tool to get people out on the streets and gain power”.

Maria Troskova, a close Fico aide, was forced out on Wednesday, February 28 after Kuciak alleged she had ties to Italians purportedly involved with the ‘Ndrangheta crime syndicate. She has denied any wrongdoing.

The murders have also sparked a wave of international condemnation amid concerns about media freedom and corruption in Slovakia.

Kuciak’s fiancee was laid to rest in her wedding gown on Friday, as hundreds of mourners flocked to her funeral in the northern Slovak town of Gregorovce. The couple were had been due to wed in May.

Kuciak’s funeral will be held on Saturday, March 2 in the northern village of Stiavnik, near the Czech border.– Rappler.com