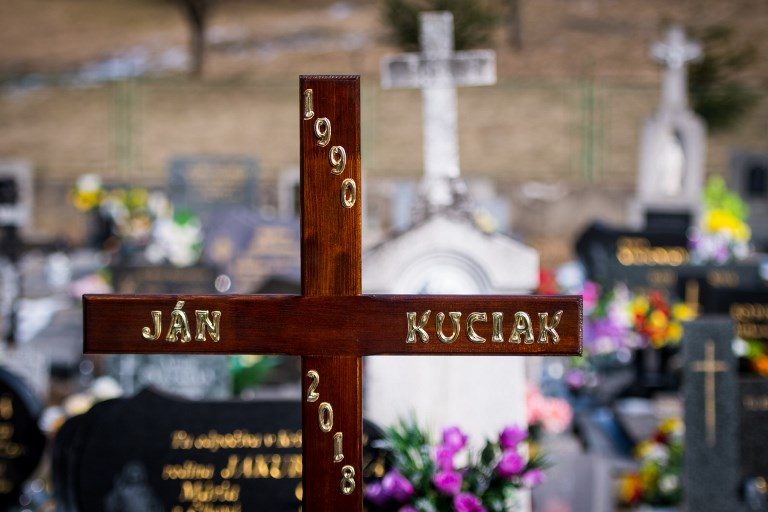 Facebook Twitter Copy URL
Copied
In Italy, prosecutors have suggested that the 'Ndrangheta may have been behind the killing of Jan Kuciak and his fiancee Martina Kusnirova

BRATISLAVA, Slovakia – Slovak police on Saturday, March 3, said they had released 7 Italians detained after they were named by murdered journalist Jan Kuciak in an explosive report on alleged high-level corruption linked to Italy’s notorious ‘Ndrangheta mafia.

The move came a day after thousands flocked to candlelit anti-corruption vigils held across Slovakia, and just hours before Kuciak’s funeral.

The murder has raised concerns about media freedom and political graft in Slovakia, sparking mass protests at home and sharp condemnation abroad.

“The investigator has, within the legal timeframe (48 hours) at his disposal, checked the facts necessary to bring charges. After 48 hours, detainees were released,” police said in a statement.

Organizers estimated that around 25,000 people gathered in the capital Bratislava on Friday evening, while thousands met in a dozen other cities and towns across the EU and NATO country of 5.4 million people.

Leftist Prime Minister Robert Fico has accused the opposition of using the murder as a “political tool to get people out on the streets and gain power”.

The latest protests echoed a wave of anti-graft rallies by mostly young Slovaks last year demanding the dismissal of senior police officials and ministers in Fico’s government for alleged foot-dragging on fighting corruption.

The 7 Italians were taken into custody on Thursday in police raids in the eastern town of Michalovce.

Slovak media reported that among those held was businessman Antonino Vadala – the owner of several companies – and some of his relatives, alleged by Kuciak to have links to Italy’s notorious ‘Ndrangheta crime syndicate and contacts in the Slovak government.

In Italy, prosecutors have suggested that the ‘Ndrangheta may have been behind the killing of Kuciak and his fiancee Martina Kusnirova who were found shot dead at their home near Bratislava on Sunday.

Kuciak’s funeral was being held on Saturday in the northern village of Stiavnik, near the Czech border.

Kusnirova was laid to rest in her wedding gown on Friday in the northern Slovak town of Gregorovce. The couple had been due to wed in May. They were both 27-years-old.

Kuciak was about to publish an article that raised possible political links between Italian businessmen operating in Slovakia and the ‘Ndrangheta.

The allegations in the report triggered an angry rebuke from Fico, who showed reporters stacks of euro bills totalling the one-million-euro ($1.2-million) reward he has offered for information that could lead to the killers.

Two close Fico associates were forced to resign after the article was posthumously published on Wednesday, while one minister quit in protest.

Maria Troskova, a close Fico aide, and his national security council officer Viliam Jasan, both of whom allegedly had past dealings with Vadala, resigned for the duration of the murder investigation, but “categorically rejected” any wrongdoing.

Kuciak alleged that Troskova, 30, had ties to Vadala, purportedly involved with ‘Ndrangheta.

The Kuciak shooting followed the October murder of campaigning Maltese journalist Daphne Caruana Galizia – who exposed crime and corruption on the Mediterranean island – in a car bombing.

Fico, who once told journalists they were “dirty, anti-Slovak prostitutes”, but vowed his government was committed to the “protection of freedom of speech and the safety of journalists” in the wake of the murder.

Christophe Deloire, RSF secretary-general told Agence France-Presse (AFP) he had asked Fico on Friday in Bratislava to “clearly express his regrets” for having publicly insulted journalists, something the RSF chief called “dangerous”.

Fico’s office later issued a statement saying that there was “no call on the PM to apologise to journalists”, denying Deloire’s claim.

But contacted by AFP, Harlem Desir, the Freedom of the Media representative at the Organisation for Security and Co-operation in Europe, confirmed that Deloire had called on Fico to apologize to journalists. – Rappler.com