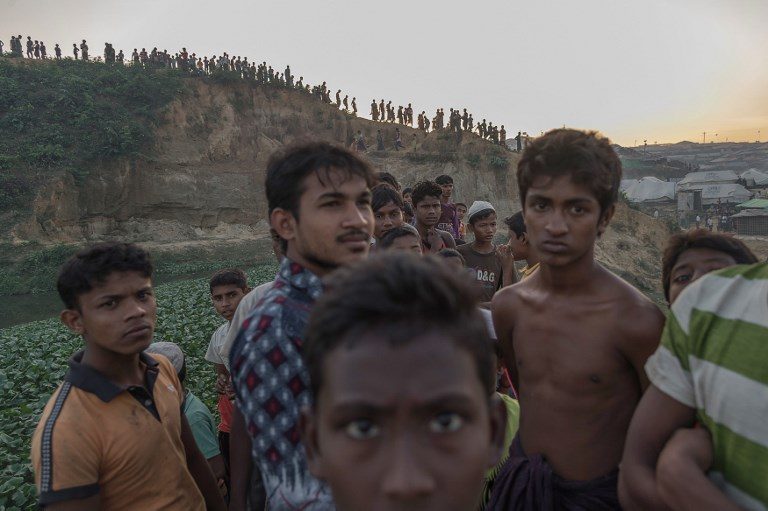 Facebook Twitter Copy URL
Copied
'The ethnic cleansing of Rohingya from Myanmar continues. I don't think we can draw any other conclusion from what I have seen and heard in Cox's Bazar,' says UN Assistant Secretary-General for Human Rights Andrew Gilmour

YANGON, Myanmar – Myanmar is continuing its “ethnic cleansing” of the Rohingya with a “campaign of terror and forced starvation” in Rakhine state, a UN human rights envoy said on Tuesday, March 6, 6 months after a military crackdown sparked a mass exodus of the Muslim minority.

Some 700,000 Rohingya have fled over the border to Bangladesh since the violence erupted in August, bringing with them consistent testimony of murder, rape and arson by soldiers and vigilante mobs.

“The ethnic cleansing of Rohingya from Myanmar continues. I don’t think we can draw any other conclusion from what I have seen and heard in Cox’s Bazar,” UN Assistant Secretary-General for Human Rights Andrew Gilmour said after speaking to newly-arrived Rohingya in Bangladesh’s crowded refugee camps.

“The nature of the violence has changed from the frenzied blood-letting and mass rape of last year to a lower intensity campaign of terror and forced starvation.”

His statement also said it was “inconceivable” that any Rohingya would be able to return to Myanmar in the near future, despite Myanmar’s pledges to start taking back some refugees.

“The Government of Myanmar is busy telling the world that it is ready to receive Rohingya returnees, while at the same time its forces are continuing to drive them into Bangladesh,” Gilmour said.

“Safe, dignified and sustainable returns are of course impossible under current conditions.”

Myanmar’s military insists its crackdown was needed to root out Rohingya militants who attacked border police posts in August, killing about a dozen people.

Doctors Without Borders (MSF) has estimated that at least 6,700 Rohingya were killed in the first month of the crackdown alone.

Hundreds of Rohingya villages were torched, and recent satellite imagery showed at least 55 villages have since been completely bulldozed, removing all traces of buildings, wells and vegetation. – Rappler.com