Mar 8, 2018 8:05 PM PHT
Agence France-Presse
Facebook Twitter Copy URL
Copied
Although niqabs are common in ultra-conservative Saudi Arabia and some other Gulf states, they're rare in secular Indonesia, where around 90% of its 260 million people have traditionally followed a moderate form of Islam 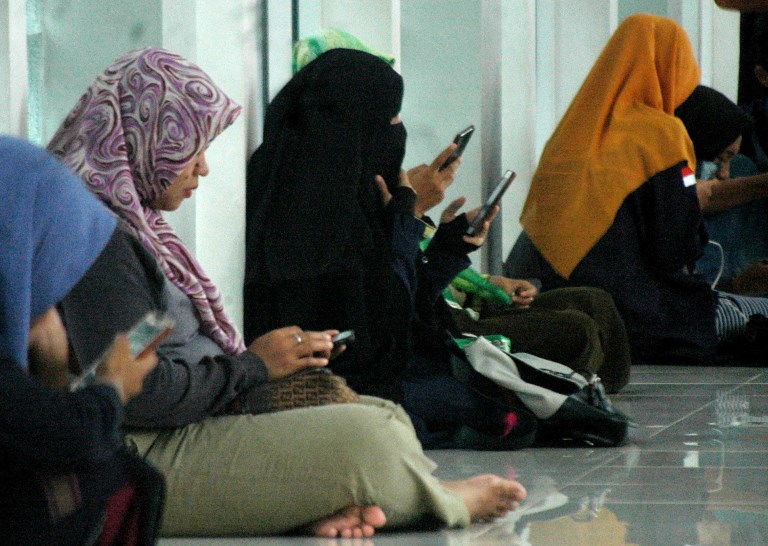 YOGYAKARTA, Indonesia – A pair of Indonesian Islamic universities are pushing female students to ditch niqab face veils – with one threatening expulsion for non-compliance – as concerns grow over rising fundamentalism in the world’s biggest Muslim-majority nation.

Sunan Kalijaga State Islamic University said it issued the edict this week to more than 3 dozen niqab-wearing students, who will be booted from school if they refuse.

Although niqabs are common in ultra-conservative Saudi Arabia and some other Gulf states, they’re rare in secular Indonesia, where around 90% of its 260 million people have traditionally followed a moderate form of Islam.

For many Indonesians, the niqab – a full veil with a small slit for the eyes – is an unwelcome Arab export and some associate it with radical Islam, which the country has wrestled with for years.

“We are a state university… we’ve been told to spread moderate Islam,” the school’s chancellor Yudian Wahyudi told a press briefing this week.

The school, based in Indonesia’s cultural capital Yogyakarta, has some 10,000 students.

Another Yogyakarta-based institution, Ahmad Dahlan University, has also introduced a new prohibition on the niqab out of fears it might stir up religious radicalism, which has seen a resurgence on many of the nation’s university campuses.

There will be no penalty for those who refuse, it added.

“But during exams, they cannot wear it because officials have to match the photos on their exam ID with them, which is hard if one is wearing the niqab,” university chancellor Kasiyarno, who like many Indonesians goes by one name, told reporters Wednesday.

Indonesia’s reputation as a bastion of progressiveness and religious tolerance has recently been tested by a government push to outlaw gay and pre-marital sex. The conservative lurch comes as once-fringe Islamic political parties move into the mainstream.

The niqab has been at the centre of a heated global debate over religious freedom and women’s rights, with France the first European country to ban it in public spaces.

Backers of the schools’ new rules said wearing a niqab is not a religious obligation.

“Education should be about dialogue – open and progressive – and if you wear a niqab it interferes in that dialogue and the teaching-learning process,” said Zuhairi Misrawi, head of the Jakarta-based Muslim Moderate Society.

But others saw the anti-niqab appeal as trampling on individual rights.

It’s “a matter of personal preference and the university has to respect that”, said Fadlun Amin, a spokesman for the local chapter of the Forum Ukhuwah Islamiyah, part of top clerical body the Indonesian Ulema Council.

Several Indonesian universities have issued niqab bans in the past.