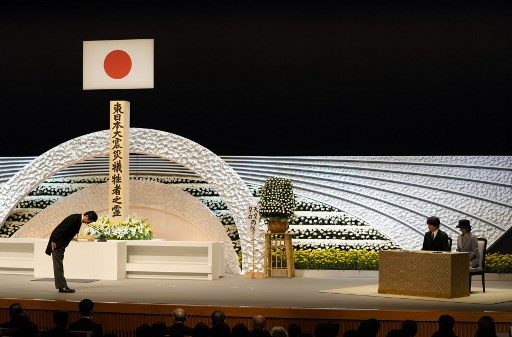 Facebook Twitter Copy URL
Copied
Authorities are encouraging evacuees to return, but a government survey released earlier this month showed that about half the residents of Namie and Tomioka are not willing to return

The magnitude 9.0 quake – which struck under the Pacific Ocean on March 11, 2011 – and the resulting tsunami caused widespread damage and took the lives of thousands of people.

The killer tsunami also swamped the emergency power supply at the Fukushima Daiichi power plant, sending its reactors into meltdown as cooling systems failed in what was the worst nuclear disaster since Chernobyl in 1986.

Abe, lawmakers and family members who lost their loved ones in the disaster bowed their heads in silent prayer at a ceremony in Tokyo at 2:46 pm (0546 GMT) – the exact moment the quake struck.

“I offer my condolences to those who lost their beloved family members and friends,” said Abe, dressed in formal mourning attire.

The 70-year-old woman from Fukushima was hit by tsunami waves right after she began preparing to leave the area with her husband and uncle.

“I grabbed a pine tree but I was swamped by the tsunami… My husband got away from me and he shouted ‘Hideko’ three times,” she said.

Igarashi survived and was later rescued by an emergency team.

“I wish I had told him to run away much earlier.”

Japan’s ageing Emperor Akihito and Empress Michiko did not attend the ceremony this year again, but were represented by their son Prince Akishino and his wife Princess Kiko.

The total of dead or missing from the earthquake and the tsunami stood at 18,434 people, according to the National Police Agency.

In addition, more than 3,600 people – most of them from Fukushima – died from causes such as illness and suicide linked to the aftermath of the tragedy, government data shows.

More than 73,000 people still remain displaced, while no one is officially recorded as having died as a direct result of the nuclear catastrophe.

The government lifted evacuation orders of some areas in Iitate village and the towns of Namie, Kawamata and Tomioka last spring, except for no-go zones with high radiation levels.

Authorities are encouraging evacuees to return, but a government survey released earlier this month showed that about half the residents of Namie and Tomioka are not willing to return.

Around 12,000 people who fled their homes for fear of radiation have filed dozens of lawsuits against the government and the Tokyo Electric Power Company (TEPCO), the operator of the stricken nuclear plant.