Allies back UK after it says Russia likely poisoned ex-spy

Mar 13, 2018 12:31 PM PHT
Agence France-Presse
Facebook Twitter Copy URL
Copied
In a dramatic escalation of diplomatic tensions over the incident, Prime Minister Theresa May says in parliament that the nerve agent used to poison the pair was a military-grade type developed by Russia 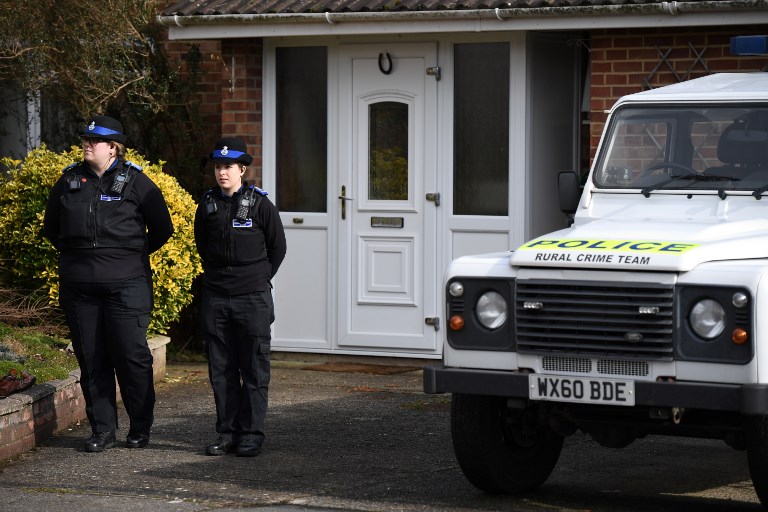 In its first public comments on the case, the United States said it had “full confidence” in the British investigation and its assessment that Russia was probably behind the attempted assassination of Sergei Skripal and his daughter in southwest England on March 4.

Secretary of State Rex Tillerson said: “We agree that those responsible – both those who committed the crime and those who ordered it – must face appropriately serious consequences.

“We stand in solidarity with our allies in the United Kingdom and will continue to coordinate closely our responses.”

Skripal and his daughter Yulia, 33, remain in a critical condition in hospital after being found unconscious on a bench outside a shopping center in the sleepy city of Salisbury.

In a dramatic escalation of diplomatic tensions over the incident, May said in parliament that the nerve agent used to poison the pair was a military-grade type developed by Russia.

She told British lawmakers that Moscow had previously used this group of nerve agents known as Novichok, had a history of state-sponsored assassinations and viewed defectors such as Skripal as legitimate targets.

“The government has concluded that it is highly likely that Russia was responsible for the act against Sergei and Yulia Skripal,” she said.

The prime minister added Britain had given Moscow until the end of Tuesday, March 13, to disclose details of its development of the Novichok nerve agents program to the Organisation for the Prohibition of Chemical Weapons.

If there was “no credible response” it will conclude it was “an unlawful use of force by the Russian State against the UK”, she warned, and pledged to outline a “full range of measures” in response on Wednesday, March 14.

The Daily Telegraph newspaper reported on Tuesday that Britain was consulting allies in NATO about possibly invoking its Article 5 principle of common defense.

NATO Secretary General Jens Stoltenberg said the incident was “of great concern” to the alliance.

“NATO is in touch with the UK authorities on this issue,” he added in a statement issued by his office Monday.

Meanwhile, French President Emmanuel Macron “offered his solidarity with the UK” in a phone call with May, Downing Street said.

“They discussed the wide pattern of aggressive Russian behavior and agreed that it would be important to continue to act in concert with allies to address it,” it added.

Britain’s interior minister Amber Rudd will chair a meeting of the government’s emergency Cobra committee at 11:30am (1130 GMT) Tuesday for an update on the investigation, the Home Office said.

The Telegraph said the national security council would also meet for a second day running, though Downing Street did not confirm the report.

Earlier Monday, Moscow rejected May’s assertions, saying it was “a circus show” and an attempt to undermine trust ahead of its hosting of this summer’s World Cup.

The prime minister’s statement was part of “another information and political campaign based on provocation,” said Russian foreign ministry spokeswoman Maria Zakharova in comments carried by news agencies.

Skripal, an ex-military intelligence officer who was jailed for selling Russian secrets to London, moved to Britain in a spy swap in 2010, settling in Salisbury.

Emergency workers in biohazard suits have been deployed to the normally quiet city as police investigate the attack with the assistance of Britain’s armed forces and its military research laboratory at Porton Down.

Pharmacology experts said Novichok, a broad category of more than 100 nerve agents developed by Russia during the late stages of the Cold War, was “more dangerous and sophisticated” than sarin or VX.

“It causes a slowing of the heart and restriction of the airways, leading to death by asphyxiation,” said Gary Stephens, a professor at Britain’s University of Reading.

Britain had voiced its concerns about Russia still having such a biological weapons capability during a 2008 meeting in Paris of countries to discuss such threats, according to Wikileaks cables reposted on Twitter Monday.

The BBC reported that investigators now believe the nerve agent may have been deployed in a powder form through the ventilation system of Skripal’s car.

Other reports in the British media hinted at growing pressure on May for England to boycott this summer’s World Cup in Russia.

“How can we go to Putin’s World Cup now” read the headline of the Daily Mail. – Rappler.com