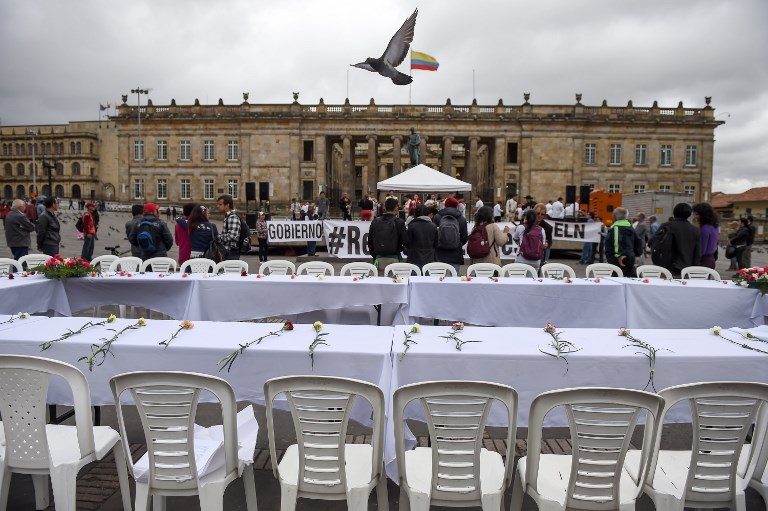 Facebook Twitter Copy URL
Copied
The latest round of talks, being held in a hacienda run by the Jesuit religious community outside Quito, are aimed at agreeing a new ceasefire that would pave the way for a final peace agreement

QUITO, Ecuador – Colombia’s government and ELN guerrillas resumed peace talks in the Ecuadoran capital on Thursday, March 15, more than two months after they were suspended over a spate of rebel attacks.

The latest round of talks, being held in a hacienda run by the Jesuit religious community outside Quito, are aimed at agreeing a new ceasefire that would pave the way for a final peace agreement.

“We can see the light at the end of the road that will lead us to the end of armed conflict with the National Liberation Army (ELN), to build a lasting and stable peace,” said the head of the government delegation Gustavo Bell.

President Juan Manuel Santos, who is due to leave office in August, is trying to conclude a peace agreement with Colombia’s last active rebel group, similar to the one he signed with Marxist guerrillas FARC in November 2016, which has since transformed into a political party.

However, the latest round of talks are being held against the backdrop of a more hostile political context in Colombia, after hardline conservatives opposed to making peace with the rebels  gained ground in legislative elections Sunday, March 18.

Santos announced Monday, March 12, that the talks would resume following the rebels’ unilateral ceasefire during the elections – seen as a test of the group’s willingness to get back to negotiations.

He said the parties would discuss a new, “broad and verifiable” ceasefire agreement that would prevent a resurgence of violence of the kind that forced the suspension of talks in January, following a series of attacks on police stations that left 6 people dead and dozens more wounded.

The ELN “will continue talking” and “does not reject peace,” said its leader Nicolas Rodriguez Bautista, according to a statement released by negotiators.

In a separate development not affecting the ceasefire, at least 6 people were killed and two wounded in a clash between ELN forces and a drug trafficking gang in northeastern Colombia, the army said Thursday.

The firefight displaced 6 families and was sparked by a turf war over several municipalities in the department of Norte de Santander, on the Venezuelan border, it said.

The clashes occurred after a meeting in which both factions “did not reach an agreement” for control of the region, “so they decided to kill each other,” General Alberto Mejia told Colombian media. – Rappler.com