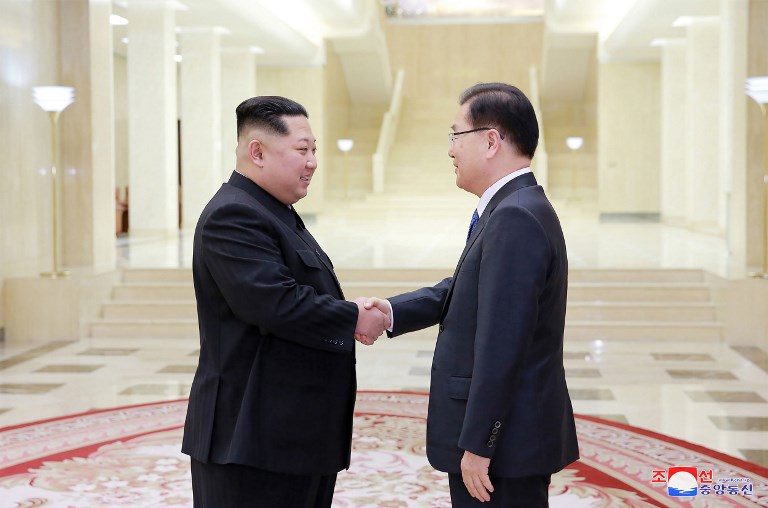 SEOUL, South Korea – The two Koreas on Thursday, March 29 set a date for a rare inter-Korean summit, following a high-level meeting that was held days after the nuclear-armed North’s leader Kim Jong Un made his international debut with a surprise trip to China.

“According to the will of both leaders, the South and North agreed to hold the ‘2018 South-North summit’ on April 27 at the South’s Peace House in Panmunjom,” said a joint press statement, read out in turn by both delegations’ leaders.

The meeting between Kim Jong Un, leader of nuclear-armed North Korea, and the South’s President Moon Jae-in will be only the 3rd of its kind, and will be followed by landmark talks with United States (US) President Donald Trump, which could come as early as May.

The venue will make Kim the first North Korean leader to set foot in the South since the end of the Korean War – although according to Pyongyang’s official accounts, during the conflict, his grandfather and predecessor Kim Il Sung went several times to Seoul, which twice fell to his forces.

Another round of working-level talks next Wednesday will discuss issues including protocol and security.

Thursday’s meeting was held in the Unification Pavilion on Panmunjom’s northern side, where the leader of Pyongyang’s delegation Ri Son Gwon said: “Over the past 80 days or so, many events that were unprecedented in inter-Korean relations took place.”

Next month’s meeting comes after previous inter-Korean summits in 2000 and 2007, since when the North has made extensive progress in its nuclear weapons and ballistic missile programs.

It has been subjected to multiple rounds of sanctions by the United Nations (UN) Security Council, US, South Korea, and others as a result, and tensions in the region have soared, with Kim and Trump engaging in a fiery war of words last year.

But a rapid rapprochement on the peninsula was kicked off by the Winter Olympics in the South and events have moved quickly since then, with a flurry of official visits between the two Koreas.

An advance team of Southern performers headed north on Thursday ahead of K-pop concerts in Pyongyang.

China’s top diplomat, State Councillor Yang Jiechi, was due to travel to Seoul on Thursday as well to brief Moon on Kim’s secretive visit to Beijing this week to meet Chinese President Xi Jinping for the first time.

It was the North Korean leader’s first overseas trip since inheriting power following the death of his father, Kim Jong Il, in 2011.

China has long been the North’s key diplomatic defender and provider of trade and aid, but relations have been strained by Pyongyang’s weapons programmes, with Beijing showing a new willingness to implement UN sanctions against it.

Even so, the two leaders hailed their nations’ historic ties, with Xi accepting Kim’s invitation to visit Pyongyang, according to the North’s official Korean Central News Agency.

“There is no question that my first foreign visit would be to the Chinese capital,” it quoted Kim as saying, calling it a “noble obligation”.

Kim pledged that he was “committed to denuclearization” on the Korean peninsula, according to China’s Xinhua news agency – but added this would depend on South Korea and the US taking what he called “progressive and synchronous measures for the realisation of peace”.

Analysts say both sides had reason to hold the meeting – Pyongyang to secure Beijing’s backing and support, and China to protect its interests in what it considers its backyard.

Robert Kelly, a professor at Pusan National University in South Korea, said: “Xi would not grant this meeting unless the Chinese were genuinely concerned about the summits to come and wanted some kind of role to play.”

The South’s JoongAng Daily newspaper said in an editorial Thursday that the meeting “makes the situation more complicated because Xi stepped into the negotiation all of a sudden”.

“China will not simply look on,” it added. – Rappler.com