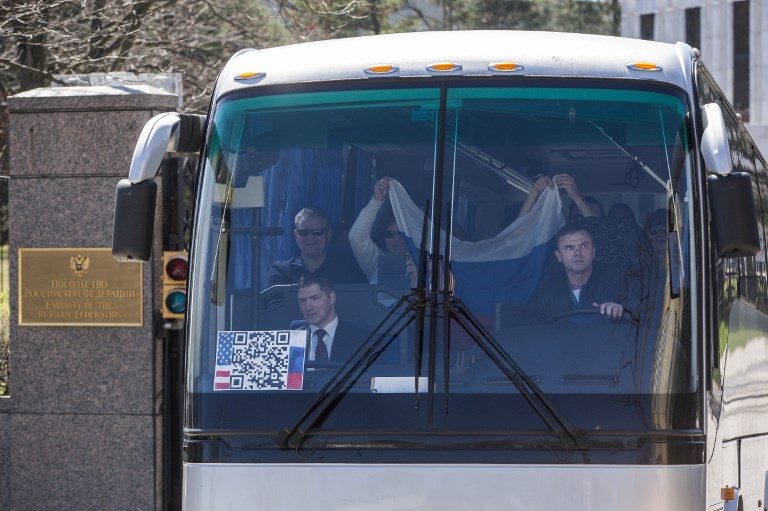 WASHINGTON, United States – Russian diplomats expelled by the United States after a nerve agent attack on a former spy in Britain began to leave their embassy in Washington Saturday afternoon, March 31, waved off by well-wishers.

About 50 men, women, and children left the hilltop embassy just after 1 pm (1700 GMT) in a blue bus believed to be headed towards Dulles International Airport.

Music played and a crowd waved the group goodbye.

A second bus was expected to leave about two hours later from the embassy site which has a view across to the White House, the Pentagon, and other US government buildings.

The departing families brought with them bags and suitcases, some of which were loaded onto the bus with help from a small forklift vehicle.

Russia’s ambassador to the US, Anatoly Antonov, earlier told reporters “all the diplomats who were declared persona non grata are flying home together with their families” on Saturday.

The Russian government provided two planes for the evacuation and one of them will make a brief stopover in New York to collect 14 families, he added.

Washington this week joined a score of Britain’s allies in expelling Russian diplomats in response to the attack, with over 150 in total now ordered out of the US, EU members, NATO countries, and other nations.

The US said it was expelling 60 alleged Russian “spies” posted around the country and at the Russian mission to the United Nations.

Russia’s consulate in Seattle will also be closed.

Moscow responded on Thursday by announcing that it was expelling 60 US diplomats and closing Washington’s consulate in Saint Petersburg.

On Friday, Russia expelled even more diplomats from 23 countries, most of them European Union member states.

The tit-for-tat measures were retaliation to the coordinated expulsion of Russian diplomats by Britain and its allies over a nerve agent attack against former double agent Sergei Skripal and his daughter Yulia in the English city of Salisbury on March 4.

Britain has said it is “highly likely” that Russia was responsible for the attack using the Novichok nerve agent developed in the former Soviet Union, but Russia has angrily denied any involvement. – Rappler.com