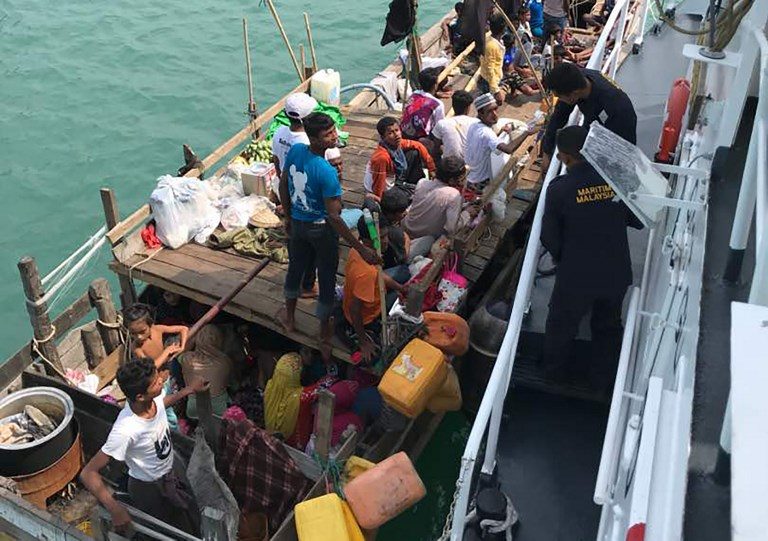 KUALA LUMPUR, Malaysia – A boat carrying dozens of Rohingya from Myanmar arrived in Malaysia Tuesday, April 3, and the refugees will be allowed to enter the country, but an expert played down fears of a new exodus.

It has been rare for Rohingya migrants to attempt the sea routes south since Thai authorities clamped down on regional trafficking networks in 2015, sparking a crisis across Southeast Asia as large numbers were abandoned at sea.

But there have been concerns desperate migrants might start taking to the high seas again after mainly Buddhist Myanmar launched a new crackdown last year that forced about 700,000 members of the stateless Muslim minority to flee to Bangladesh.

Malaysian authorities intercepted the Rohingya boat off the northwestern island of Langkawi, after it was first spotted at the weekend off Thailand, said navy chief Ahmad Kamarulzaman Ahmad Badaruddin.

“All 56 passengers, mostly children and women, are safe but tired and hungry,” said the navy chief.

“We have provided them with water, food and other humanitarian assistance. The boat and its passengers will be handed over… to the immigration authorities.”

The navy and coastguard had stepped up patrols around Langkawi – where Rohingya have come ashore in the past – after the boat was spotted of Thailand’s west coast at the weekend and its passengers said they were trying to reach Malaysia.

Chris Lewa, of Rohingya advocacy group the Arakan Project, said the vessel was thought to have left a week ago from the Rakhine state capital Sittwe. But she did not expect many more to be following.

“April is the end of the sailing season so we don’t expect many boats now,” Lewa told Agence France-Presse.

The 2015 crisis began when Thailand discovered mass graves in a human-trafficking camp along its southern border and launched a crackdown on the brutal networks that ferry migrants to Malaysia.

Unable to offload their human cargo in Thailand anymore, traffickers abandoned them at sea in large numbers, leaving them trapped on boats with little food and water.

Images of emaciated Rohingya pleading for help from overcrowded boats drew global condemnation, and forced Indonesia and Malaysia to allow hundreds of Rohingya to come ashore after initially refusing.

Muslim-majority Malaysia has long been a favorite destination for Rohingya, as the country is relatively affluent and authorities are sympathetic to their plight.

Tens of thousands have been allowed into the country, where they toil in low-skilled industries such as agriculture and construction – earning low wages and with little hope for the future.

The situation is however much worse for the hundreds of thousands of Rohingya who have fled the latest crackdown in their homeland.

They are living in cramped and often squalid conditions in Bangladesh’s Cox’s Bazar district, where many Rohingya who fled previous waves of persecution are already living.

An agreement to repatriate Rohingya from Bangladesh to Myanmar’s Rakhine state has yet to see a single refugee returned. – Rappler.com